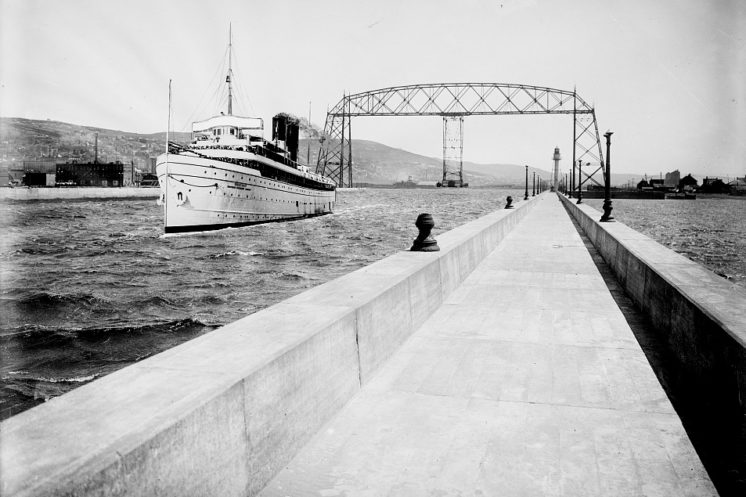 This manipulated photo from the Detroit Publishing Company is filed by the Library of Congress as “Ship canal looking in, Duluth, Minn.,” and is roughly dated 1906. The summary of the item describes the manipulation:

Photo shows a ship with the words “North West. Northern Steamship Co.” The ship appears to be pasted into the canal scene, with hand-drawn smoke and mast — a composite photograph.

Below is another image of the North West, via the University of Minnesota Duluth’s Archives and Special Collections at the Kathryn A. Martin Library, loosely dated 1909. This second photo appears to be the source image of the vessel, cut out of the background and inserted into the other. It’s at least similar. Above is a closer look at the manipulation. It’s pretty good overall, but the smoke kind of gives it away.

The North West was a passenger steamer built in Cleveland in 1894 by the Globe Shipbuilding Company. It was operated by Northern Steamship Company of Buffalo, N.Y. Along with its sister ship, the North Land, it ran between Buffalo and Duluth with stops in Detroit, Cleveland, Chicago, Sault Ste. Marie and Mackinac Island.

The North West’s interiors would be decked out in mahogany and brass in the Louis XV Rococo style. Bronze and marble statues rubbed elbows with passengers on their way to the lavishly appointed staterooms, reading rooms, parlors, cafes, smoking rooms and a dining room fashioned after a prince’s banquet hall. She also was loaded with all sorts of amenities for the time, including flush toilets and hot water with constant water pressure.

Passenger service ended on June 3, 1911, after a fire damaged the ship. “This is when things get really interesting,” the Historic Detroit piece continues. Read that description for the details, but here’s the summary: The front half of the North West ends up sinking in Lake Ontario in 1918; the back half is torpedoed by a German U-boat and sinks in the North Atlantic Ocean south of Ireland in 1941.

https://www.youtube.com/watch?v=-6C7cGGimqg Four Minnesota Governors got together to encourage Minnesotans to set a good example and vote.