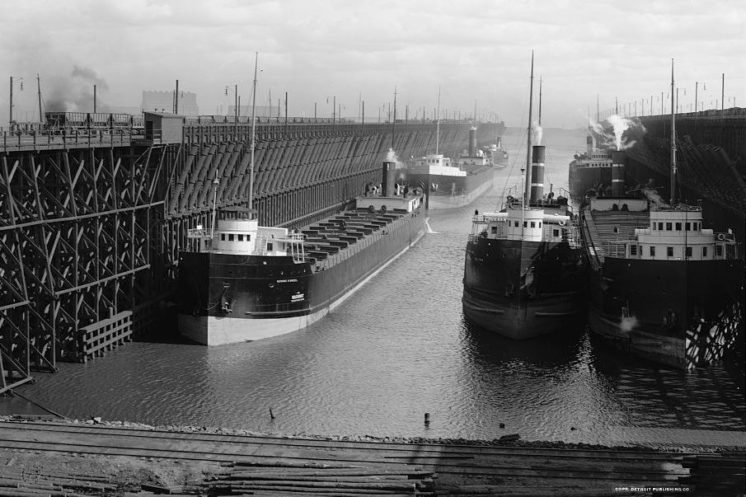 This photo of the Duluth, Missabe and Northern Railway ore docks in West Duluth is from Detroit Publishing Company. The Library of Congress dates the image as “between 1900 and 1915” and notes it shows “probably Dock No. 1 at left” and lists the three freighters in the foreground as George H. Russell, Sultan and James E. Davidson.

Duluth’s first ore dock was built just east of 34th Avenue West in 1893. The DM&N built several docks on this location for loading iron ore from Minnesota’s Iron Range for shipment to steel plants in the eastern part of the country. The first five docks were built of wood, which was gradually replaced by steel and concrete. By 1917, the five docks were handling more than 20 million tons of iron ore annually. The docks were the largest in the world, stretching more than 2,000 feet from shore.

The DM&N became the Duluth, Missabe and Iron Range Railway in the 1930s through various mergers.

Canadian National Railway acquired the DM&IR and its ore docks in 2004 when it purchased the assets of Great Lakes Transportation. Since 2011 the property has been controlled by Wisconsin Central Ltd., a subsidiary of CN.

Below is a similar photo to the one up top, from the same source on the same day. And the final image is dated 1904 and labeled “Steamers loading at the Mesabi ore docks, Duluth, Minn.” Competition to name the Perfect Duluth fish fry was fierce but the The Breeze Inn managed to angle ahead of...