Elvis – A Day in Duluth 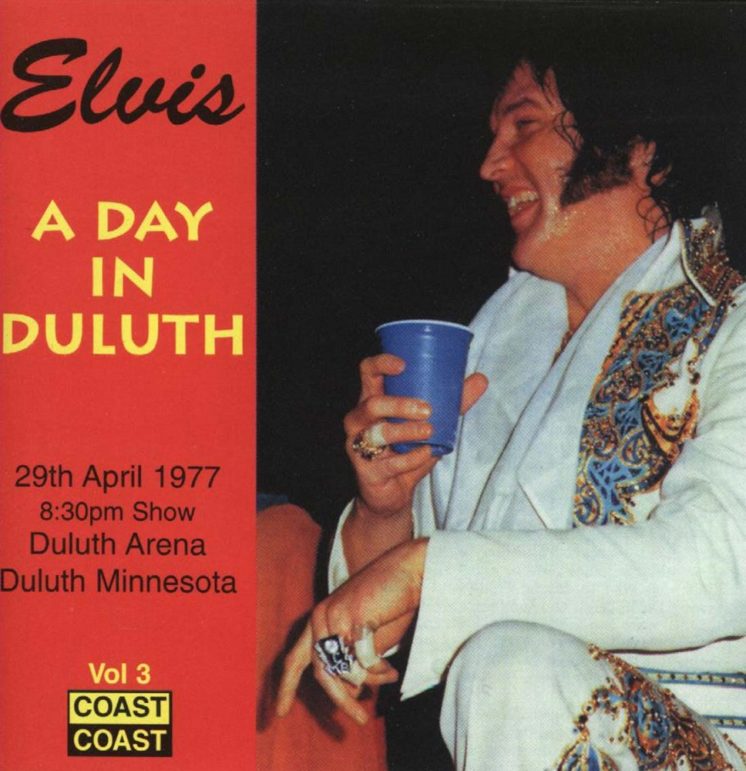 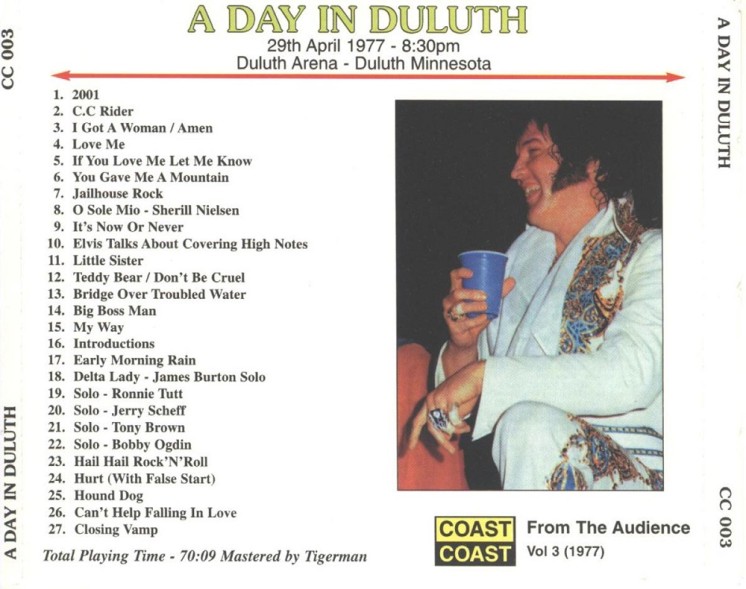 A previous post on Perfect Duluth Day reveals a Led Zeppelin bootleg from the 1960s is incorrectly labeled as “Live in Duluth.” Well, it turns out there is an Elvis Presley album titled A Day in Duluth that has every indication of being authentic.

We know the King did indeed perform at the Duluth Arena on April 29, 1977 (and also on Oct. 16, 1976). So, the only question before us would be: Does the album contain material actually recorded in Duluth, or is it just another random mislabeled bootleg show?

The album happens to be available on YouTube, broken up into four parts. Most of the recording lacks the “Thank you very much, Duluth” moments that would authenticate it as a Duluth Arena show. But if you listen all the way to the end, after “Elvis has left the building,” an announcer thanks “the Radisson Hotel for its hospitality to the Elvis Presley show.”

There are other Radissons in the world where the King surely lodged, but newspaper accounts mention his tour renting three floors of rooms at the Duluth Radisson each time he played the Zenith City. So that lends some credibility to the Duluth bootleg, though it doesn’t really guarantee authenticity. The comment section of this post is open for disputes and presentation of further evidence.

Here is an alternate album cover with the title Duluth Revisited. And for additional background … A somewhat subdued yet happy — almost giddy — Elvis Presley did what he does best again Friday night in the Duluth Arena. A capacity crowd got what it came for at $12 to $15 a head for a show that was identical in most ways to the one Elvis put on here in October. The side acts were the same, the introductory music was the same and even some of comedian Jackie Kahane’s jokes were the same.And despite reports that Elvis had ballooned up to 285 pounds and was ailing, he looked pretty good. There’s no question that he’s fighting the battle of the bulge like most 42-year old men. But his paunch was well contained in his white sequined suit and massive belt and he looked healthy enough, even at close range.

The Elvis magic was still intact. Women still scream and try to make it to the stage to be immortalized by a kiss. A few made it. The white scarves, fresh from his damp neck, were handed out to screaming fans. Police and ushers fought the crowd back and one young woman fell and broke her leg at the foot of the stage. Her only regret, as police and Gold Cross ambulance attendants worked on her backstage, was that she was missing the performance. “I wanna go back and see Elvis,” she cried, her knee bulging as though a golf ball had been implanted in it. She left in an ambulance. And while this small drama was unfolding behind the scenes, Elvis continued at center stage, doing as much bantering with the audience as singing. The crowd at stage front surged some more, with many women trying to pass bouquets of flowers to their idol.

Just for the record, the 8 p.m. concert got under way about 8:30 after the Elvis entourage had milked the audience dry selling posters, belt buckles, programs and other memorabilia at tables situated throughout the arena. Once again, Elvis’ very fine male quartet opened the show, followed by the comedian. He worked in the names of Mayor Beaudin and County Atty. Keith Brownell as well as some popular references to Twig. “I knew there were a lot of people from Twig here, I saw their plows parked outside.” Some day a comedian is going to come to Duluth and not mention Twig.

Kahane introduced the soul singing Sweet Inspirations, a female trio with a lot of bounce, and they took it to the intermission. It was 9.30. The half hour intermission gave fans one more opportunity to purchase Elvis souvenirs, relentlessly hawked by sales people festooned with buttons bearing the singer’s likeness. They were for sale too.

At precisely 10 p.m., wrist-watch time, Elvis’ band struck up the now-familiar introduction — the “Space Odyssey” song — and the great man swaggered to the stage, blue spotlights playing on him and thousands of hand-held cameras popping flashbulbs. The crowd surged forward down the aisles despite the protestations of ushers and police and he was off and wriggling.

The star didn’t wriggle quite as much as last time, and he seemed to be having trouble remembering the words to some of his own standards. “I Can’t Help Falling in Love with You” received a lot of help from his backup singers. “My Way” and “Bridge Over Troubled Waters,” not songs generally associated with Elvis went better.

Still the crowd was pleased. After about an hour’s work, Elvis left the Arena, bound for more glory and Duluth International Airport, three floors at the Radisson vacated to be sold to more ordinary customers who can come and go more freely, but don’t make as much money.

It’s becoming fashionable for reviewers to say that Elvis is slipping a bit, but it’s never safe to underestimate the boy from Tupelo, Miss., whose impact on popular culture at mid-century and beyond is undisputed. As radio commentator Paul Harvey said in 1955: “The kid won’t last a year.” 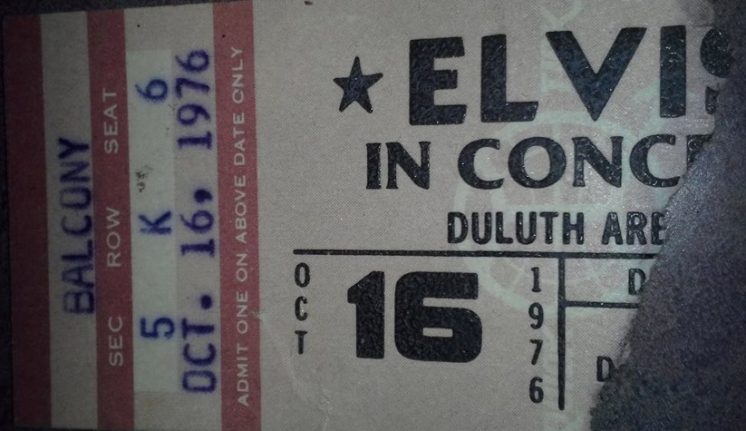