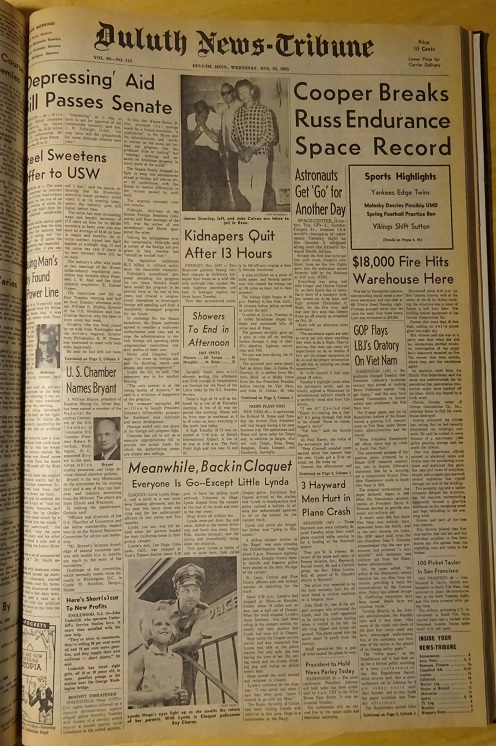 Fifty years ago — Aug. 25, 1965 — the DNT reports that 8-year-old Lynda Hage exited her parent’s camper in Cloquet to use a rest room, then was left behind when her parents departed for their California home.

Lynda’s dad, Lee Hage, Coronado, Calif., had stopped at Tom’s Texaco Station about 2:30 p.m. to have the pickup truck serviced. Unknown to Hage, Lynda slipped from the camper at the rear of the truck and went to the rest room.

Hage drove off without her.

Lynda emerged from the rest room, looked a the vacant driveway and burst into tears. Peter Fink, station manager, saw her crying and immediately recognized the situation.

Fink gave Lynda a bottle of pop to quiet her, then called Cloquet police. Patrolman Roy Charon arrived at the station, took Lynda to headquarters and police radioed a bulletin to all area law enforcement agencies to be on the lookout for the camper truck.

Lynda told police she thought her father was “going to Wisconsin.”

A pickup camper similar to the Hages’ was seen crossing the Duluth-Superior high bridge about 3 p.m. Wisconsin highway patrolman, Douglas County deputy sheriffs and Superior police were placed on alert. No sign of the camper.

St. Louis, Carlton and Pine County officers also met without success in searching for the truck.

About 4:30 p.m., Lynda’s dad stopped at Mora — in Kanabec County about 70 miles and an hour and a half our of Cloquet. When the truck stopped, Lynda’s three brothers, who had been riding in the camper section, excitedly told their parents that Lynda had been left in Cloquet.

Hage called the Cloquet service station and was reassured that Lynda was safe at the police station. Not only safe, she was having the time of her life, eating candy and ice cream, drinking pop and trying on policemen’s hats.

Hage turned the truck around and returned to Cloquet.

Lynda’s comment on the situation: “I was awful sad when I saw they were gone, ’cause I wanted to go with my Mom.”

The Hages, formerly of Cotton, had been visiting friends and relatives in that area. Hage is a commander in the Navy. Lynda Hage’s eyes light up as she awaits the return of her parents. With Lynda is Cloquet policeman Roy Charon. 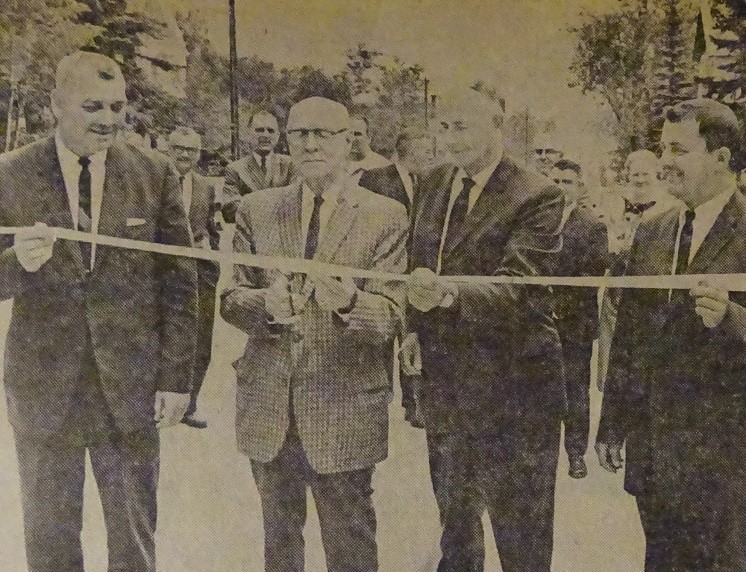 Taxpayer Has His Day
John Q. Taxpayer had his day Tuesday when Paul Dahl, 201 S. 21st. Ave. E., was given the honor of cutting the ribbon opening the newly reconstructed 21st Avenue East to traffic. Dahl is one of the taxpayers who were assessed for part of the cost of the project, which was partially financed by municipal state aid funds. With Dahl, from left, are City Engineer Paul Davidson; Carl Lund, director of the Public Service Department, and Archie Eagles, chairman on the Duluth Chamber of Commerce Streets and Highways Committee.