Bobcat in the Snare

From my friends at Wildwoods, with a warning that some images are graphic: A landowner who treasures his local wildlife spotted this bobcat on his trail cam. He noticed that the bobcat had a snare tightly cinched around his midsection, cutting into his flanks. After the landowner contacted us, two of our star volunteers (thanks Jason and Heather!) and the property owner worked together to live-trap him. They put the trap out on Monday morning, and by Monday evening, they had caught him.

On Tuesday, we took him to Dr. Powell at Dougherty Vet Clinic (thanks Dr. Powell and Dougherty Vet Clinic for seeing him!). After Dr. Powell sedated him with a shot given with a long pole syringe, she shaved around the wound to expose the damage and to better reveal the snare embedded in the bobcat’s flesh. After she cut away the snare and cleaned up the damaged tissues, she gave him a shot of an long-lasting antibiotic. There were prominent wounds to both of the bobcat’s flanks. Fortunately, the wounds, though really gory-looking, don’t involve underlying muscle or his genitals. Dr. Powell christened the bobcat “Clyde”.

Clyde had broken both his upper canine teeth, likely trying to chew through the anchor line of the trap, which was broken and dangling when he was rescued.

Because of his wounds and his bald spots, the bobcat will need to recuperate indoors for 4-6 weeks before he is released back into his home territory.

The landowner who treasures the presence of this bobcat and his mate does not allow trapping on his property. His going to talk to his neighbors and encourage them to not set traps or snares near his property’s boundaries.

What happened to this bobcat is terrible…but is also perfectly legal. Should it be? Snares are are banned in 20 of the 50 states. Should MN be #21? There is currently a bill before the Minnesota state legislature (Senate File 592) to ban the use of snares in our state as well. Wild animals are in the public trust, and we all have a say. Voice your opinions to your lawmakers as soon as possible; this week if you can. You can find out who your elected representatives are and how to contact them here: http://www.gis.leg.mn/OpenLayers/districts/
(This message should not be interpreted as lobbying on PDD, says David. Voice your opinion, no matter which side you are on!)

All pics are courtesy of Vrieze Photography. 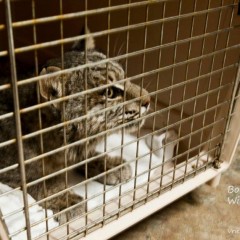 Our first friends, as goes the cliché; seldom mellifluous relationships, ever-vying for our parents' beneficence, until one day we can't....