Trespassing at UMD’s Old Main in 1992 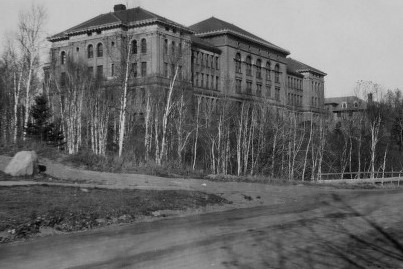 One summer night in 1992, when I was 19 years old, I came home from doing something forgettable and found three of my friends waiting for me. They said I should grab a flashlight and come with them on an adventure.

“Where are we going?” I asked, wondering if I should even bother asking. “You’ll see,” was the answer, just as I anticipated.

“Are we going to be arrested tonight?” was my next question. It was more of a joke than a sincere concern. The response, “We can’t guarantee you won’t,” lead me to believe we were indeed about to do something illegal, but the tone suggested there was either a low likelihood of getting caught or if we did the consequences would fall below the level of felony charges.

We drove all the way across town, to an old building on East Fifth Street, hidden in a residential area. It was the Old Main building, the centerpiece of the Duluth Normal School campus before it expanded to become the University of Minnesota Duluth.

The building consisted of classrooms, administrative offices, a library and an auditorium. It was designed by Duluth architects Emmet Palmer, Lucien Hall and William Hunt and opened in 1901. UMD stopped using it in 1985.

I was well aware of UMD and its campus, but I didn’t know about Old Main and the other slightly-off-campus buildings. Old Main was dark and boarded up, but the other buildings were dimly lit and still in use by the college as office and research space.

Jeff, the leader of this expedition, took us to the side of the building and pointed at an open window on the second floor.

“That’s where we get in,” he said. “All we have to do is climb up this fire escape and shinny along that ledge.”

If we had to break something to get in, I would have backed out of this adventure, but since trespassing seemed to be less of a crime than breaking and entering, I didn’t hesitate.

Bob, on the other hand, was afraid of heights, and no amount of peer pressure was going to convince him to shinny along the second-floor ledge of anything. He would stay outside and be our lookout, even though he had no way of communicating with us once we were inside.

The ledge was easy to navigate, but it was still nerve-wracking because falling would mean serious injury or possibly death.

The windows on the upper floors weren’t boarded, so most of the rooms were dimly lit by the streetlights outside. We mostly kept our flashlight off to avoid drawing attention to ourselves, but when we came to darker rooms, we used it.

In one hallway, a previous trespasser had spray painted the word “die” on the wall, but it wasn’t too scary, because it looked like “pie.” Barrett felt weird about the building, like he’d been inside it before. We later learned Old Main had the same design as Irving Elementary School, which he attended a decade prior to this mission.

There were a lot of pigeons in the building, and when we entered one room we flushed a couple of them, which was the most frightening moment of the tour.

We left the building with no injuries and no police attention.

A few days later, we decided to go back in broad daylight. It wasn’t much riskier than sneaking in at night, since there was a streetlight by our access point. Once inside, it was actually less likely we’d be spotted than at night. We wouldn’t need a flashlight at all and could get a good look at everything.

In daylight, we had the nerve to go up into the attic, which was very large and proved to be the highlight of the Old Main experience. We found a box of enrollment cards up there from the early 1900s. Had we found that at night, ghosts would have attacked us for sure.

Jeff discovered the building’s intercom system was still wired up, and he figured we could bring in a boombox and splice into it. He was right.

We came back with a mix tape of creepy sound effects and music by Skinny Puppy and Lard. Our trial run being a success, we decided to have a Halloween party at Jeff and Bob’s apartment, then bring girls to Old Main at midnight so we could scare the crap out of them with the boombox and cassette we planted.

We found a new entry point, through a boarded window on the ground floor, so it was easy to convince the girls to come in with us. Jeff sneaked away from the group to activate the sound system, as planned. Unfortunately, the music ended up making it obvious that we were trying to scare the girls, which made the whole experience entirely not scary for anyone.

Halloween 1992 was the last time we were in Old Main. A developer announced plans to convert the building into apartments shortly after, but on February 23, 1993, a fire gutted it. A different group of kids had gained entry, and one set fire to a seat in the auditorium.

The remains of Old Main were mostly demolished and removed, with some of the bricks sold as a fundraiser, but the red sandstone arches were left standing. Below is Barrett, sitting mournfully at the arches in the summer of 1993. Some great storytelling events coming up!

Local storyteller extraordinaire Elizabeth Nordell is organizing the following exciting events. Be sure to put them on your calendar!