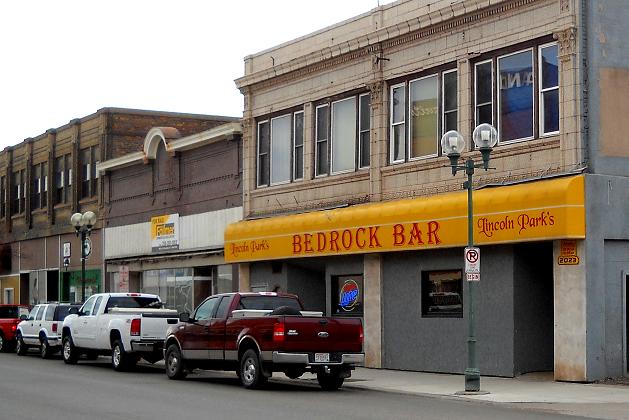 The post “Minnow Swallowing Contest in Duluth” led to a discussion about where the Amber Flow Bar was located. The answer quickly emerged … 2023 W. Superior St.

Time for a little tavern genealogy …

Bedrock Bar opened in 2001, owned by Ray and Patricia Tarvas. Ray Skelton took over in 2004, but died in 2006. Tammi Benson and Cary Gimpel took over from there.

Before that it was briefly Tom’s Junkyard, operated by Tom Lemon.

Throughout the 1990s, it was Roby’s Bar & Lounge, owned by Tom Robillard. City directories list George Gothner, Char Kervina and Daniel Borndal as proprietors. An old Roby’s sign is still on the side of the building. During the mid-to-late 1980s, it was the Slippery Saloon: Mark Wrazidlo, proprietor. The Amber Flow first opened across the street, at 2020 W. Superior St., in the mid 1930s. It took over the space of the undertaking business run by Joseph Olson and Maytor Hoppenyan.

The original owner of the Amber Flow was Joseph G. Kasper. He ran it at the original location for 20 years, then moved across the street to 2023, which had previously been the Grand Union Tea Co., a retailer of coffee, tea and groceries.

The Wrazidlo family — Frank, Richard, Robert and Leonard — took over the Amber Flow in the early 1960s.

The old Amber Flow, at 2020, has been home to numerous businesses over the years. Recent ones include: Metro Appliance Service, New Tech Concepts, GCS SVC, Inc., and more recently Magic Paint.