In a Feb. 18 post the maps for the proposed Cross City Trail – which will connect the Munger Trail to the Lakewalk – were laid out, with photos showing the various route options for the westernmost section shown in the comments. A Feb. 28 post showed a photo tour of the middle section of the proposed trail.

In this post, the route options for connecting Clyde Park to the Duluth Lakewalk are shown. Here are the maps to follow along with:

The journey starts at Clyde Park. By the way, the restaurant and nightclub there are taking shape and should be open in a month or slightly longer. The restaurant will be somewhat similar to Cossetta’s Italian Market-Pizzaria in St. Paul — sort of a buffet-style setup. And they’ll be brewing beer there. But I digress.

The proposed trail would go down Helm Street, by Michaud Distributing and the old Duluth Malting & Brewing Co. building. The trail might have to turn left and go up 29th Avenue West if plans can’t be sorted out to keep it going straight. If it turns it’ll go past Stewart’s Bikes and Sports, in case you need parts or something. The route up 29th is Alternatives 2 and 2a, which would go along Michigan Street or Superior Street for about a half mile. You can use your imagination for those options, the photo tour will stick with Alternative 1 for now.

Apparently the route would be the grassy area along the fence behind the Main Post Office, because Helm is a one-way here and using a one-way street for a bike route is probably not the best idea. This route would continue around Con-way Freight … … and around Northwoods Trucking … … and comes to a junction of potentials near the Duluth Transit Authority headquarters. Alternatives 2 and 2a meet up with Alternative 1 here (on different sides of the DTA building). For now, let’s follow the Alternative Connector and Alternative 2. The lay of the land this way is tricky, but I think it’s the better option. So, above is the view of the Alternative Connector. Follow the gravel. Somehow this route would snake behind Bill’s Muffler and Brake Center and the old Like New II yard. Then it would meet up with lower Michigan Street. This guy is already into it. Here’s another rider taking on the most difficult part of the route, getting up this hill. After passing the M&H gas station, turn right on this bridge over I-35 and that will connect with Alternative 1, which takes you to the Lakewalk.

Wait, back up a minute. What is this Alternative 1 — the route that looks the best on paper? Well, let’s go back to the DTA headquarters and choose that option instead. For this route, go under the freeway to the bay/harbor side. The first thing you’ll see is the Western Lake Superior Sanitary District’s wastewater treatment plant … … and that’s why this route is a little less pleasant. Maybe it’s not WLSSD, but something smells awful here. Even though this option seems preferable to auto service yards and riding on Michigan Street, it’s amazing how much more the air tastes like the Superwood plant on this side of the freeway. Maybe some trees could be planted to create a buffer, but it would take a long time to grow them. After the on and off ramps for the Blatnik Bridge, the trail would slant right toward the pedestrian bridge staircase, where it meets up with Alternative 2. From there, all options are the same. 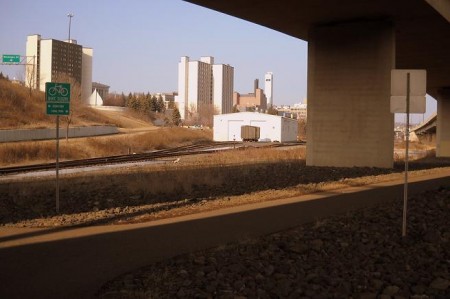 Just follow the existing bike route under the bridge … … and you’ll be at the Lakewalk in no time.

The ski hill at Chester Bowl is scheduled to stay open through this weekend, but it looks like Mother Nature...