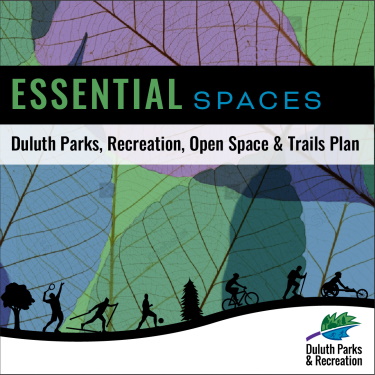 Duluth Parks and Recreation has released the draft Essential Spaces: Duluth Parks, Recreation, Open Space and Trails Master Plan. The 426-page PDF provides guidance on Duluth’s play spaces for the next decade and offers recommendations on how the city can “continue to support a healthy and vibrant community, enhance inclusion and equity, and advance environmental protection in our park system within a sustainable budget framework.”

The draft Essential Spaces master plan and a comment form are available at duluthmn.gov/parks. Printed copies of the plan are available for review at the Parks and Recreation office on the ground floor of Duluth City Hall during regular office hours, 8:30 a.m. to 4 p.m. and all three Duluth Public Library branches.

On Aug. 11 the city administration announced it will ask the city council to authorize a referendum that would, if approved by voters, increase funds generated by the existing park fund levy and allow the funds to grow over time by changing the levy from a fixed dollar amount to a fixed percentage of taxable property value.
capital maintenance.

The original park fund levy, approved by voters in 2012, was established at a capped dollar amount of $2.6 million annually, with no allowances for growth or adjustment to account for inflation or market changes. The proposed change would allow market-driven fluctuation in the future. Pending council approval, the ballot question will be presented to voters in the General Election this November.

The council will vote on the ballot language at its Aug. 15 meeting. More information on the park fund can be found at duluthmn.gov/parks/parkfund.

Some years ago, I had a Duluth nameplate hanging from the back of my bicycle, which I suppose is why...