Postcard from the Aerial Bridge in 1905 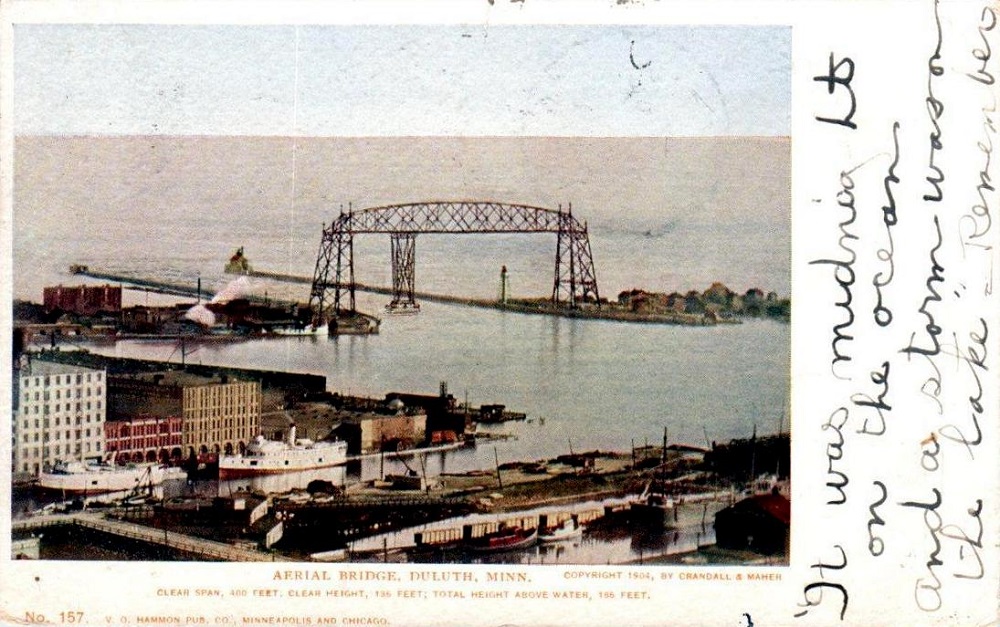 This postcard from the V.O. Hammon Publishing Company features an image copyrighted in 1904 by Crandall & Maher (presumably Robert S. Crandall and James Maher). The card was mailed out of Duluth on Sept. 29, 1905 and arrived in Ohio on Oct. 2. It was sent to Miss Emily Booher of Mt. Gilead. The sender’s name is not on the card but the message scrawled on the front reads:

“It was midnight on the ocean and a storm was on the lake.” Remember.

The eerie message could be referencing any of the various shipwrecks that had happened on Lake Superior prior to the postcard being sent, but if it’s related to the famous Mataafa wreck of 1905, then the message was written on the card after it was mailed. The Mataafa went down two months after the postmark date.

The fine print on the card lists some Aerial Bridge stats:

The Aerial Bridge had just opened as a ferry bridge six months prior to the postcard being mailed, and was converted into a lift bridge in 1930. So the image that is “copyright 1904” is possibly an illustration of what the bridge would look like when finished, based on a photograph taken by Crandall & Maher while it was under construction. Or the copyright date could be wrong.

Inspired by their father’s long-gone West Duluth restaurant, two brothers have announced plans to open a new eatery that will...