Annually, the College of St. Scholastica sells books, records, and other media — in part, it looks like, to clear shelves of material that does not circulate, and in part, I think, to offload donations.

I managed to snag a few items worth thinking about. The first was a biography of St. Lutgarde by Thomas Merton.

Mystics of the Church tells us St. Lutgarde’s story:

Lutgardis (or Lutgarde) was born in 1182 in Tongres, Belgium. When she was twelve she was placed in St. Catherine’s Benedictine Convent at Saint Trond because her family did not have the necessary dowry for marriage. During her teenage years, a young man fell in love with her and began paying her frequent visits. Pleased and a little flattered by these attentions, she was content to have them continue. One day, while the simple girl was speaking with her admirer, Jesus suddenly appeared, blazing before her astonished eyes. He revealed the spear-wound in His side, and said to her: “Seek no more the pleasure of this affection: behold, here, forever, what you should love, and how you should love: here in this wound I promise you the most pure of joys.”

The Benedictine convent in the story explains why this book was at CSS: The College of St. Scholastica is a Benedictine school. 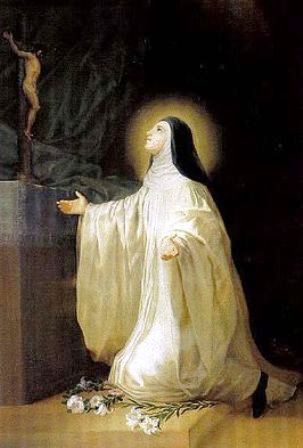 After the first vision, Lutgarde struggled through more miracles and gifts. In a way, like the story of the Monkey’s Paw, the story of Lutgarde is the story of being careful what you wish for.

God increased His miraculous favors upon her, so that the fervor of the young girl and her zeal for prayer and penance might bear the stamp of His approval. Once, some nuns came upon her alone at prayer in the middle of the night, and found her filled with a vivid radiance that poured out of her body which completely astonished them. Another time, on the Feast of Pentecost, when the Veni Creator Spiritus was intoned in choir at Tierce, Lutgarde was suddenly lifted two cubits from the floor, and was seemingly floating in the air on the wings of some unseen spiritual power. Thomas of Cantimpre explains that ‘her body had thus been granted a momentary share in the privileges of her spirit, because of the fact that her soul had already arrived at a high degree of purity and union with God.’

In fact, her intimate familiarity with God is illustrated by what might seem to some to be a presumptuous or cavalier attitude in expressing her likes and dislikes to Him, which we shall now see. For it came to pass at this time that she was granted a certain power of healing in which her very touch had the effect of instantly curing the little sicknesses of those who came to her. She perhaps thought it would help her lead souls to Jesus, yet it seemingly became a great distraction for her and her fellow nuns. Understandably, she soon found herself beginning to be very busy with those who appealed to her to cure them of their minor ailments. She complained to God of this, assuring Him that it interfered with her and the others prayer life: “Why did You go and give me such a grace, Lord? Now I hardly have any time to be alone with You! Take it away, please,” and she added, artlessly, “only give me another grace, give me something better!'”

“What grace do you want Me to give you, then, in its place?” Jesus asked of her.

Lutgarde, being a choir nun, thought it would be very appropriate if she were to be granted a miraculous understanding of Latin, in order that she might have more devotion in reciting the psalms. As matters stood, she did not understand a word of what she said in choir, although she prayed with great fervor. The grace granted, she discovered to her surprise that once again it did not have the result she expected. She began to receive many vivid intellectual lights at the Office, and to be illuminated by numerous penetrating intuitions into the meaning of the psalms. But somehow all this new knowledge left her heart empty and dry.

God had granted her this last relatively useless favor together with enough light to see that it was not what she needed, and she soon turned to Him once more confessing that all these lofty intuitions only interfered with her devotion instead of nourishing it. (Mystics of the Church)

I don’t know if you can feel my cringing through the computer screen, but the idea that knowledge injures your relationship with the spiritual just kills me. The desire for a relationship with God, unmediated by language in that way, also kills me — Catholicism was becoming, at this time, deeply mediated (by language, prayer, and church hierarchies). But this mystic craved something else. 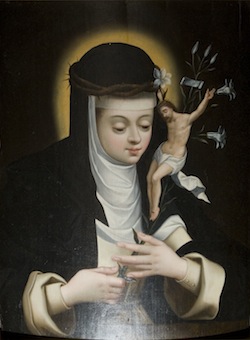 According to a website at the University of Notre Dame,

Eleven years before she died, she lost her sight. She saw this loss as a gift—as a way to further detach herself from the things of this world. During one appearance, Jesus warned her of her impending death, and instructed her to prepare for it with three practices: to praise God for all she had received; to pray for the conversion of sinners; and to rely on God alone. She did these things and died on the day that was foretold to her, which was on this date in 1246.

Relics of St. Lutgard rest in the reliquary chapel in the Basilica. 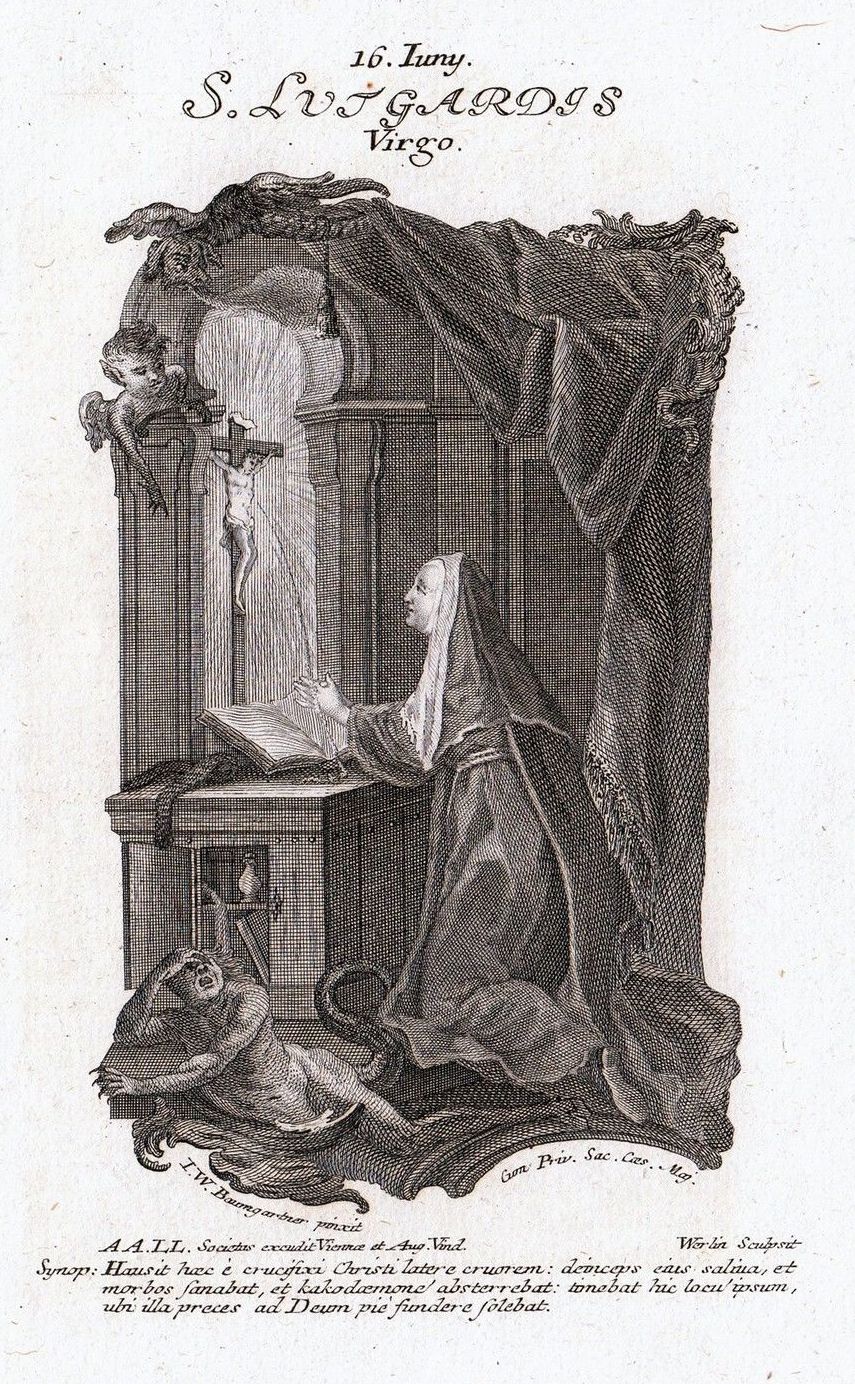 Lutgarde’s story was first told by Thomas of Cantimpré, the thirteenth-century Dominican theologian, preacher, and compiler of notes about saints. According to Pamphlets to Inspire, Thomas of Cantimpré “studied under St. Albert the Great, was acquainted with St. Thomas Aquinas, and knew St. Lutgarde of Aywières for sixteen years.” Nonetheless, his narrative is filled with the magic we might expect of a 13th century Catholic recording the mysteries of their faith. Part of me feels a smirk coming on (as I read), but I remember how little I know what it meant to be a writer seven hundred years ago.

Merton’s account is more or less uncritical of Thomas of Cantimpré — to be too critical would be to undermine his only source, in some ways. 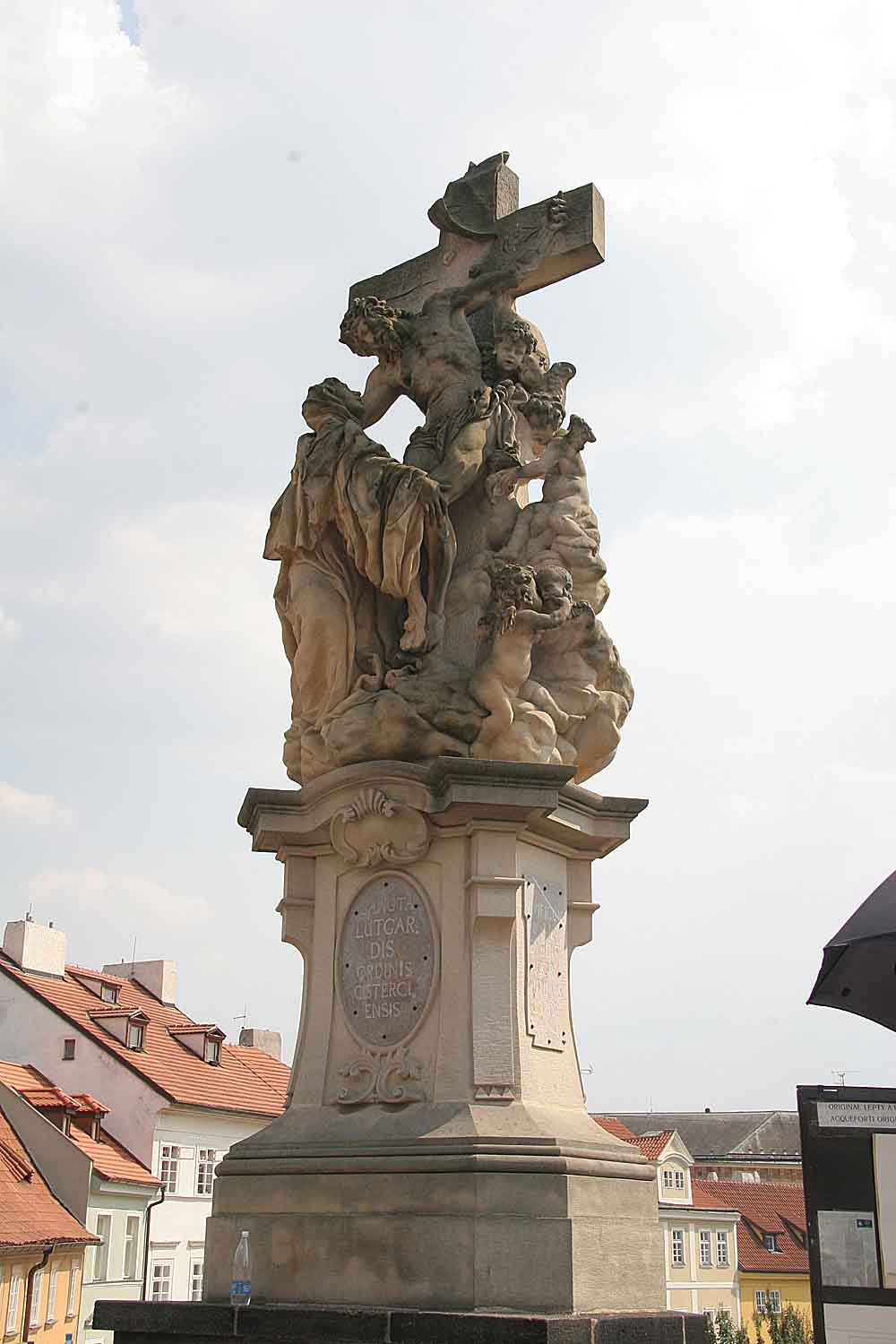 One of the things I love most about finding a book like this is working my way backward through the history of religious art. I would be lying if I said that some of these images are untroubling. There are gender dynamics and relationships to the body that are genuinely medieval. 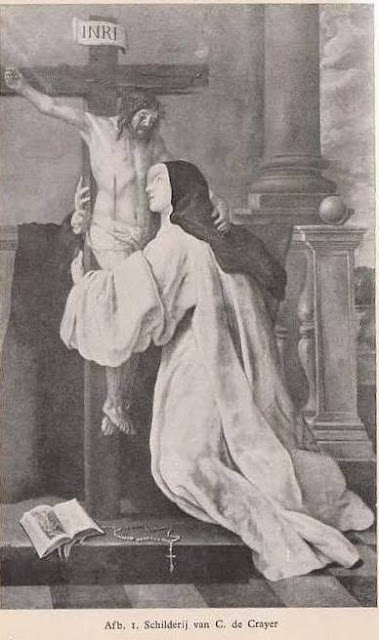 But you can see the passion of faith in these works — the parts that are technically unsophisticated (perhaps because art at the time was technically unsophisticated — we forget that things like “the proportions of the human body” and “vanishing point perspective” were inventions, as surely as the lightbulb was) are still alight with the energy of faith. Even if I do not share that energy, I feel it.

The book I grabbed from the CSS book sale was intended for monastic readers, but I feel lit by its energy, as well.

This postcard features a drawing of Duluth, Superior and the St. Louis River, and was copyrighted by Thomas W. Wahl...