While John Wilkes Booth remains infamous as the actor who assassinated Abraham Lincoln, his older brother Edwin was actually the better known of the two prior to Lincoln’s assassination as he was considered one of the greatest Shakespearean performers of the 19th century. Edwin Booth feared that his brother’s crime would destroy his own reputation and career even though he was not only a supporter of Lincoln, but also once saved the life of Lincoln’s son by grabbing him as he fell from a train. Edwin Booth’s open expression of horror at what his brother had done led to continued public support after Lincoln’s assassination and he remained a successful actor until his death. To this day, no actor has performed the role of Hamlet more times than him.

At the age of 54, Edwin Booth teamed up with fellow famous Shakespearean actor Lawrence Barrett and in 1887 they began what turned out to be a very popular and financially successful national tour.

A search for the word “Duluth” in the 1893 book The Life and Art of Edwin Booth shows Duluth as the fourth stop on this tour, after Buffalo, Detroit and Minneapolis. The actors performed for a single night at the Grand Opera House on September 26, 1887, before moving on to Eau Claire the next day. This Duluth performance is confirmed in the photo shown on the left where an advertisement for the two actors can be seen on the side of the building (enlarged below). Only their names are given and not the work they would be performing, because the particular Shakespearean texts that they performed changed from night to night. [Note: all the photos of the Grand Opera House come from public domain images in the collections at the University of Minnesota Duluth, Kathryn A. Martin Library. The larger photos have all been digitally modified to remove damage, increase clarity, and, in some cases, remove ambiguity.  Links as well as thumbnails are provided for the original images to make these changes more transparent.]

Othello was the most common performance on the tour, with Booth playing Iago and Barrett playing Othello. The photo below shows Edwin Booth as Iago on the left, around 1870, with an 1887 photo of Lawrence Barrett on the right. Between them is the stage of the Grand Opera House taken around the time of their performance.

A recording of Booth reciting lines from Othello three years after his Duluth performance has survived (and is the first recording of Shakespeare by an actor). The sound quality is quite poor, but it is possible to follow along with the text as given in the comments from the first link. The recording beings with, “Most potent, grave, and reverend signiors, my very noble and approved good masters, that I have ta’en away this old man’s daughter, it is most true; true, I have married her…” The Grand Opera House, shown here under construction at the corner of Fourth Avenue West and Superior Street in 1883, was just four years old when the two actors came to Duluth and was one of the most remarkable buildings in the city. As described on the Zenith City website, the Grand Opera House was designed by George Wirth with construction supervised by Oliver Traphagen, the architect who worked on many of Duluth’s most notable buildings. The 1,000-seat auditorium served a Duluth population of 13,000. Underneath its purple mansard roof, the building also housed the Chamber of Commerce, a grocery store, several offices, the Kitchi Gammi Club, and Ladies Literary Library. The photo here shows the building in 1885, two years before the performance of Booth and Barrett. Edwin Booth died at the age of 59, just six years after he came to Duluth, but he still outlived Duluth’s Grand Opera House by four years. The photos below show the front and side of the building after a massive fire on January 28, 1889. The building was completely destroyed with perhaps the only positive outcome of the fire being that part of the insurance money went to the Ladies Literary Library who used the funds to create what would become the Duluth Public Library. While the Grand Opera House may be gone forever, other iconic Oliver Traphagen projects, including the old Central High School and the Pastoret Terrace Building, still contribute to the distinctive architecture of downtown Duluth, at least for now. 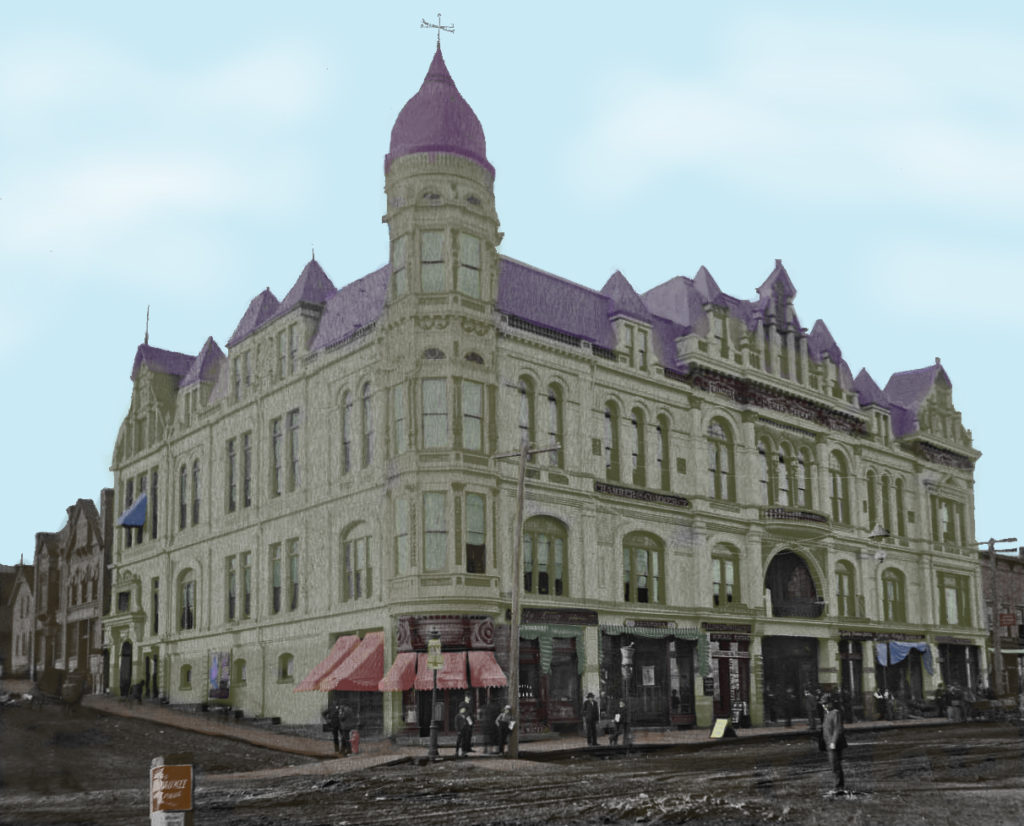 The Grand Opera House around 1888, colorized to show an interpretation of the distinctive purple roof