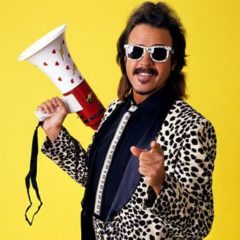 Prior to a Heavy on Wrestling card in Duluth this past weekend, “The Mouth of the South” Jimmy Hart sat down for an interview on Fox 21. At the very outset he launched into an anecdote that seems to imply a tag team he managed, the Hart Foundation, wrestled the British Bulldogs in Duluth in the 1980s.

In the dressing room before the match, so the story goes, a dog named Matilda, the literal bulldog that accompanied the two wrestler “Bulldogs” to the ring, became agitated by Hart’s megaphone and unexpectedly attacked it. The summation of the story is that the surprise attack by Matilda in Duluth inspired planned antics by Hart at Wrestlemania III, the famous wrestling card that attracted 93,173 people to the Pontiac Silverdome in Pontiac, Mich., considered at the time to be the largest audience for a live indoor event in North America.

Here’s the story as Hart told it:

I was sitting in the dressing room. We were going against the [British] Bulldogs — me and the Hart Foundation. I was putting my batteries in my megaphone. Matilda, the little dog, was in the corner. When I put the batteries in the siren goes off. I didn’t know the dog hated the siren. All of the sudden the dog attacks my megaphone. But at Wrestlemania III, when I got into the ring, you saw Matilda attack me. That’s because I learned that she hated the megaphone, so when I get in the ring I turned the megaphone on, the dog would jump on the megaphone, I take a big bump, roll around, but that’s what happened right here in Duluth.

Two problems: There is no record of the British Bulldogs ever wrestling in Duluth. And the World Wrestling Federation did not hold a card in Duluth until May 14, 1987 — a month and half after Wrestlemania III.

Davey Boy Smith of the British Bulldogs did wrestle in Duluth on Aug. 8, 1987, but was filling in for B. Brian Blair and partnered with Jim Brunzell — not his usual British Bulldogs partner Thomas “Dynamite Kid” Billington. Jimmy Hart and the Hart Foundation made appearances on different Duluth cards, not that one … and, again, all of those cards were after Wrestlemania III.

Of course, the reason for pointing this out is that no where else are facts more important that the world of professional wrestling.

Earth Rider Brewery in Superior has named Allyson Rolph and Tim Wilson as lead brewers. The craft brewery, founded by...