Quick drone flyover at Devil’s Kettle Falls on the Brule River in Judge C. R. Magney State Park on the North Shore of Lake Superior. This specific set of falls, about 20 minutes east of Grand Marais, draws visitors far and wide for it’s unique mystery: half the river disappears into a hole (kettle) and no one knows where all that water goes.

As the water falls the river slightly divides by a rhyolite rock knob in the middle of the river. The eastern side of the river (left side if looking downstream) flows over two-step waterfall and continues into Lake Superior. The western side of the river (right side looking down stream) mysteriously drops into a hole in the rock and is never seen again. Scientists and others have tried many experiments to determine where the water goes, but all attempts have proven fruitless. Colored dyes, logs, ping pong balls, GPS trackers and more have been thrown into the river and sucked into the abyss only to never be seen again.

It’s a lot of water to disappear into a kettle. Some say the underground river comes out about 1.5 miles away on the shore of Lake Superior, but it has never been proven.

There have been a couple nonfiction books that have alluded to the Devil’s Kettle, which has added to the popularity of the mysterious waterfall. Unraveled Sleeve by Monica Ferris and Jennifer’s Body by Audrey Nixon are two I have heard about.

So where does it all that water go? 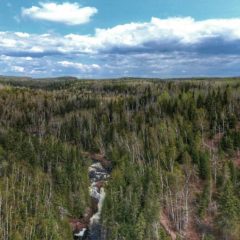 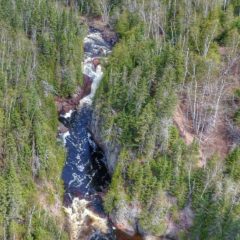 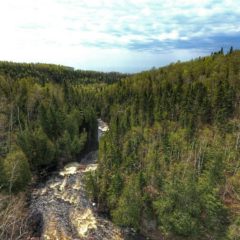 Like many people, I didn’t start to drink coffee until college. Back then, as a newbie, I offset its bitter...