Seasonal restaurants reopening in and around Duluth for 2016 Nothing signifies the emergence of spring quite like the reappearance of malts on the Duluth Lakewalk and the wafting scent of fried fare from seasonal burger joints. For those ready to indulge, here’s a rundown on seasonal restaurant re-openings.

Gordy’s Hi-Hat in Cloquet reopened on March 20, the first day of spring. The classic hamburger stand is a favorite among locals and a popular stop for Twin Cities travelers headed to cabins up north. The restaurant, now in it’s 56th season, is known for its hand-pattied burgers and onion rings, and was featured on Diners, Drive-ins and Dives. A & Dubs, another nostalgic burger joint in Duluth’s West End, will reopen on Mother’s Day, May 8. The seasonal, family-run business at 3131 W. Third St. was founded in 1948 as Duluth’s first drive-in restaurant. A & Dubs holds a special place in the hearts of residents of western Duluth. It’s a remarkable relic; nowhere else in Duluth has ice-cold root beer and burger baskets delivered by carhops for in-vehicle consumption.

Ice cream aficionados will be pleased to know the Denfeld Dairy Queen and the PortLand Malt Shoppe are already serving up decadent desserts.

The PortLand Malt Shoppe is operating under limited hours, from 12 to 6 p.m. for now. Owner Sandra Ettestad says hours are weather dependent, if the weather is great, the shop will stay open until 8 p.m. Located in an historic old gas-station building in the former Portland Township, the malt shop at 716 E. Superior St. is known for its old-fashioned malted milkshakes, complete with whipped cream, a wafer and a cherry on top. 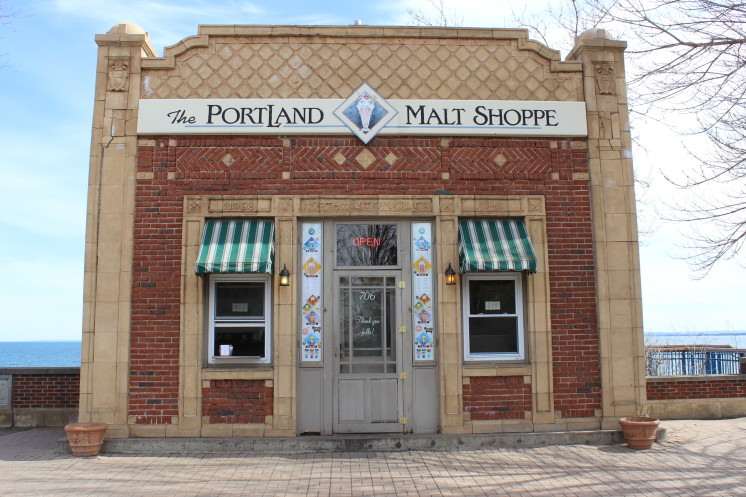 The Denfeld Dairy Queen has been open since March 2. Owner Chuck Koltes says despite the chilly recent temperatures, business has been good. Chili dogs, dilly bars and other sweet treats are all available at the 4431 Grand Ave. location. East enders looking for treats may have noticed Chocolate Shoppe Ice Cream in the former Dairy Queen building at 1631 London Road is up for sale. Owner Craig Binsfield told the Duluth News Tribune in February if it doesn’t sell by June, he’ll reopen it.

Endion Station Public House was closed for winter, but will reopen soon. It’s one of several bar/restaurants owned by Just Take Action, the parent company that also runs Fitger’s Brewhouse. Located in a prime spot near the Lakewalk, at 200 Lake Place Drive, Endion Station has been undergoing some renovations. Owner Rod Raymond anticipates it will be open again by May, possibly sooner. Among the changes, the pub has added low-top tables, a bar with a lake view, and an outdoor fire pit. A revamping of the menu is also in the works, and they have plans for live music. One thing will remain the same: Endion Station will continue to offer an array of tasty hard ciders and craft beer on draft. As part of the One River, Many Stories project, Lake Superior Magazine’s April/May issue features Molly Hoeg's profile of Clough...