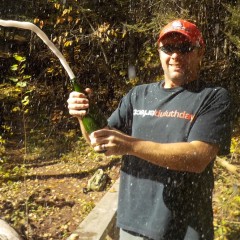 The champagne bottle popped shortly after noon today. In what must rank among the laziest accomplishments in endurance sports history, I completed the final stretch of my quest to hike the entire Superior Hiking Trail … 15 years after I started.

The 296-mile journey was tackled in about 45 different hikes spread out between Sept. 24, 2000, and Oct. 11, 2015. The longest single hike was about 15 miles. The shortest was today’s hike, which was less than a mile. Perhaps some day I’ll gather stories from the journey into some sort of narrative, but for today I’ll just present a simple breakdown of the mileage per year.

Note: The mileage below adds up to 330, not 296. There are certain parts of the trail that changed courses over the years, so I hiked both versions. I also hiked every spur and overlook, and those miles are sometimes included and sometimes not included. Overall there’s a lot of rounding and imprecision here.

A big thanks goes out to my support team — the people who drove 100 miles here and there to pick me up or drop me off, or sat in a parking lot in the dark waiting for hours, etc. This includes my wife, parents, aunt, now-deceased dog, and at least four friends — with particular props to Lumpy G for driving to Finland on a moment’s notice in the pouring rain so I wouldn’t have to sleep on the floor of the West Branch Bar in 2006.

Time to send 'em in. Your creepy, comical, kooky Halloween banner photos, those long skinny photos at the top of...