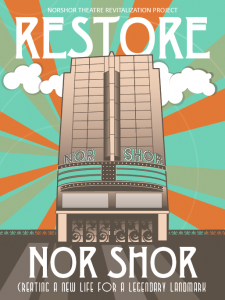 The city of Duluth announced in a news release today the restoration Duluth’s historic NorShor Theatre could begin before the end of 2015, with a grand reopening expected in mid 2017, now that the project has finalized its funding sources.

David Montgomery, Duluth’s chief administrative officer, shared details with the City Council during its Monday committee-of-the-whole meeting. He said none of the funding will come from property taxes.

The project’s $29.6 million renovation costs break down like this:

Final agreements will be brought to the DEDA for approval on Sept. 23, followed by a city council vote on Sept. 28.

Restoration of the NorShor, which originally opened as the Orpheum Theater vaudeville house in 1910, will be managed by Sherman Associates, a Minnesota real estate developer, and will include renovating the 750-seat theater, new utilities systems, accessible elevator and stairwell, a skywalk connection and a new stage. The 101-year-old Duluth Playhouse will operate the completed facility, which will host performances by the Minnesota Ballet, Duluth Superior Symphony Orchestra and other local organizations, as well as national acts.

According to the news release, “the new NorShor is expected to draw tens of thousands of people downtown on about 200 nights a year for entertainment, dining, shopping, lodging and more.”

http://www.youtube.com/watch?v=BgOdGmOiXsQ Mocha the dog and her owner Chris of Duluth.