Nerd Culture: Games at Rogue Robot, Comics at the DAI, Nerd Nite at the Zuccone

Exhausted. Weeks of nerdery behind and ahead.

Last Thursday, I went out to dinner with authors who grew up on the range — Roy C. Booth and Cynthia Booth. Roy will be at CONvergence in a few weeks celebrating his new book, Orphans. 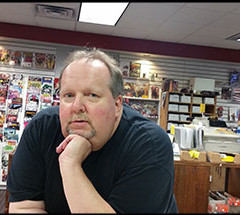 Sunday, I went out to dinner with Tim, a central fixture in Minnesota comics life, at the Buffet at the Bear. OMG, I love that buffet — and on Sunday, Lutefisk.

Monday night was game night — we met first for dinner at 7 West Taphouse. It’s a diverse, fun crowd, including one of the back stage masterminds from Game Show at the Underground and the owner of 8 Bit Classic Collection. See this play. Shop this shop.

Later this week, I hope to check out the DAI to see some comic art, including some pieces on loan from my collection. The Duluth Art Institute features artists from Minnesota, most from the Duluth area, who are doing interesting work in comics and storytelling. Highlighting the broad number of voices in the state’s comic community from large to small publishers and from mainstream superheroes to independent and underground works: John Hoban, Clint Hilinski, Peter Gross, Barb Schulz, and others. The program is here: MN Comics exhibition guide. The exhibit was discussed in the DAI here. The exhibit runs from June 18 to Aug. 27. Gallery talks will happen in August, including one by Lake Superior College librarian Kate Vo Thi and one by local comic shop operator Timothy Broman.

Annie Dugan will be doing a talk about the comic show next Tuesday at Nerd Nite. The full schedule includes: “Vexing Vexillology: The Good, the Bad, and the Ugly in Flag Design” by Lawrence Scott Lee, “Minnesota Comic Book Artists: An Overview” by Annie Dugan, and “How to Represent Yourself in Court: the Layman’s Guide to the Legal System” by Dwight Deeth.

I hope you will join Nerd Culture if the music calls your soul.