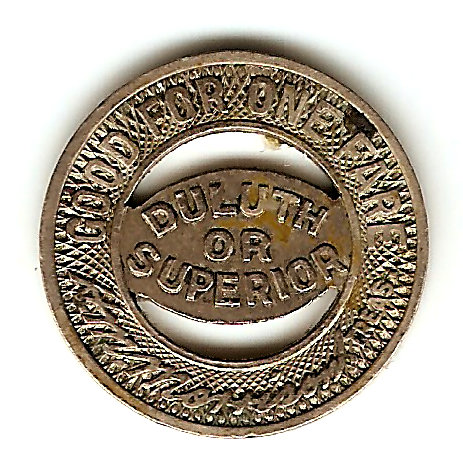 I recently acquired a Duluth-Superior Transit Company token from a friend and thought I’d post it in case anyone can pinpoint the year of its creation or share any interesting details.

It should be noted that the images above do not accurately reflect the size of the token. It is slightly smaller than a U.S. dime.

What I know from very brief research: * Duluth-Superior Transit Company tokens do not seem to be particularly rare. You can buy a fistful of them on the Internet.

* The Duluth-Superior Transit Company formed in 1933, taking over all of the properties of the Duluth Street Railway Company (which had been incorporated in 1881). According to the History of Public Transportation in the Twin Ports, “the transit system’s mixed fleet in 1933 consisted of 110 streetcars, two electric trolley buses and nine gasoline-powered buses.”

* The era of the Duluth-Superior Transit Company ended in 1969, when Duluth Mayor Ben Boo announced the city would buy all of its assets for $630,000. An act of the Minnesota State Legislature that year created the Duluth Transit Authority, the bus company that serves Duluth and Superior today.

* The token I have bears the name of H. M. Morrison, treasurer. Most versions of it on the Internet are dated 1942, but I’m not sure how that date was arrived at or when Morrison’s career ended. He had been serving as secretary-treasurer as early as 1919, according to the Duluth Herald.

This Week: a double dose of Dessa, the good Thicke, MLK and more

Here's a bit of what you'll find on this week's PDD Calendar: There's no need to be bored, when you...