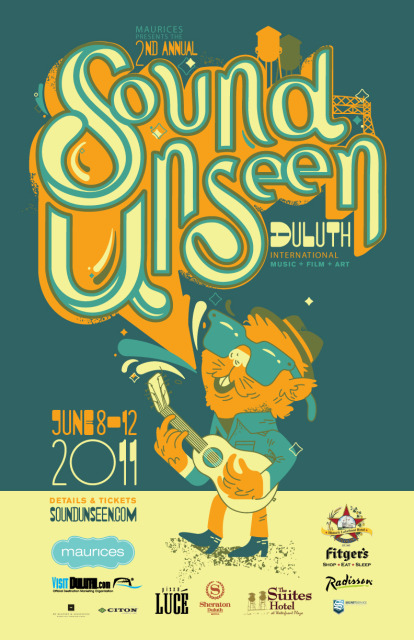 Sound Unseen International Duluth is proud to announce its second annual International Film, Music and Art Festival, presented by Maurices, from June 8-12 in Duluth. Unlike our festival in the Twin Cities, the Duluth festival allows us to expand our programming beyond “films-on-music” (although still included via our In Competition music films) and brings world-class cinema, art and music to the Twin Ports area.

— Wednesday, June 8: Our “soft opening” at Sacred Heart Music Center featuring “Light Factory”; an art, music and cinema installation at Sacred Heart Music Center curated by Kathy McTavish that will feature artists Tim Kaiser, Coleman Miller, members of Too Many Banjos and Angela Brannan. This event honors Life House, an organization helping homeless youth off the streets and into safe housing, education, and employment opportunities in the Duluth community since 1991.

— Thursday, June 9: Our official Opening Night Film + Party at Clyde Iron Works: “Sing Your Song” makes its Minnesota premiere, a documentary about singer/actor/activist Harry Belafonte. This is a very special screening for us as this film has only screened in four other festivals (Berlin, SXSW, Tribeca, Sundance). Harry’s daughter Gina, also one of the producer’s of the film, will be in attendance for a Q&A following the film. The party will commence on the mezzanine level featuring complimentary appetizers, drink specials from TallGrass Brewing Co. and special music guests. Tickets on sale now – $10/advance, $15/door.

— Friday, June 10: Minnesota premiere screening of “The Ballad of Genesis of Lady Jaye” at Fitger’s Spirit of the North theater and Official After-Party at the Flame (in Superior) featuring performance artist/drag queen Esme Rodriguez (Minneapolis). Co-presented by the Out Twin Cities Film Festival. Producer Steve Holmgren will be in attendance for a Q&A.

— Saturday, June 11: Our official Closing Night Film at Fitger’s Spirit of the North theater: “Color Me Obsessed” makes its Duluth Premiere, the first documentary on the influential Minneapolis band the Replacements. Producer Jan Raddar in attendance for a Q&A following the screening.

— SUID Festival “Music Headquarters” will once again be at Pizza Lucé and what’s different this year? All shows are free at Pizza Lucé! We’re stoked about our music line-up this year: The Tribe & Big Cats!, Hastings 3000, Cars & Trucks, BNLX, Pink Mink and more to be announced! Maurices will also be presenting Sick of Sarah at Clyde Iron Works on Friday, June 10 with Angela Brannan for only $5!

— Tickets are on sale now! Tickets to all our films are $7 in advance and $8 at the door  (unless otherwise noted) — so buy them early to save! We highly recommend purchasing the all-access pass for $50 (a $200 value) that gets you in to all the films, parties and music events for the duration of the festival.

Lastly, as we are only in our 2nd year and building our festival here in Duluth, that means we are still fundraising. So, if you’d like to be a part of our festival in more ways than one, please consider donating (from as little as $1) to our Kickstarter campaign here.

We look forward to being back in Duluth and hope to see you at the festival!

Summer Opportunity for Youth in Duluth