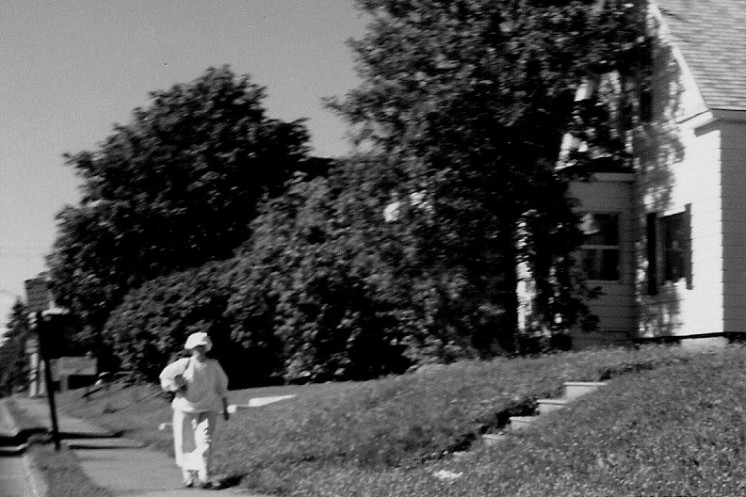 In 1994 I worked for six months at the Holiday Stationstore at 3401 Grand Ave., next to Wheeler Fields. The store closed around 2003 and the building is empty now. As you can imagine, there were a number of characters that frequented the store. One of them we called Turban Lady.

Turban Lady was a cranky old woman who, obviously, wore a turban all the time. One day I remember her coming in and complaining to me that I shouldn’t sell candy bars to kids because they just throw the wrappers on the ground.

Anyway, I saw Turban Lady walking down Grand Avenue a few years later and wanted to capture her image in order to better preserve the memories of my summer at Holiday. So there she is in the photo above — September 23, 1997.

Other characters I remember from working at Holiday:

* Budgeteer Boy was a guy in his 60s who delivered the Budgeteer in the neighborhood and when he stopped at Holiday he always bought a six-pack of 3.2 beer and some peanuts.

* Doughnut Lady was a woman who came in every day, bought a doughnut and used the pay telephone.

The most memorable character wasn’t from Holiday, though, but from my next job as clerk at the Shack Liquor Store:

A final note: I won’t name names — because I guess I’m still honoring the liquor store code 15 years later — but another thing I remember from my days at the Shack was a certain local millionaire stopping in frequently to buy lottery tickets. That never made sense to me. The lottery is supposed to be for poor suckers, isn’t it?

I had always assumed …