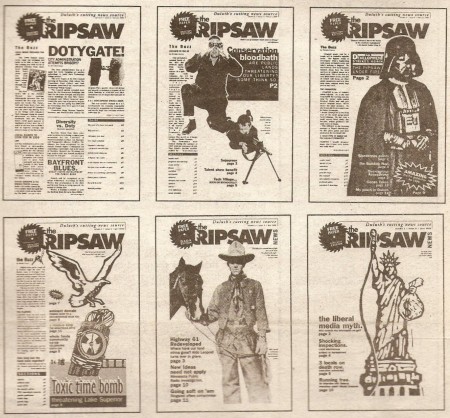 It’s been 10 years since the Ripsaw published the last of its monthly scandal sheets and converted to an “alternative newsweekly” format. Here’s a look back at the old monthly editions of Duluth’s most infamous rag.

Above are the covers of the first six issues of the modern Ripsaw (January to June, 1999). It should be noted that there was an even more notorious Ripsaw published by John L. Morrison from 1917 to 1926. A lengthy account can be found of the entire history of the Ripsaw on Wikipedia. Somebody even made a long list of headlines from the Morrison years.

Below are issues 7-12, from July to December of 1999. To this day we tease Cord Dada that his cover art was frequently homoerotic. The February 2000 issue was the last of this style. Two months later the Ripsaw became a weekly — and that’s a whole other story. Below is the cover of the last monthly issue. The lead story was about the controversial golf course planned for Spirit Mountain. It was written by Jim Richardson and was very well done. Trust me on that, I don’t have time to transcribe it.

This issue was kind of transitional for the Ripsaw. Although the look of the paper was still old school, the Morrison style of journalism was gone. (Disclosure: It was my fault; I had just become managing editor.)

During the year the Ripsaw was a monthly it wasn’t unusual at all to take blatant potshots at local politicians, particularly Mayor Gary Doty. Above is the “Howdy Doty” cutout from one of the early issues, complete with movable mouthpiece.

Below are a few advertisements from February 2000 that bring back some memories. Remember 3-Minute Hero and Surahoolies? They were out-of-town bands that played several Duluth shows, all of which were a blast. (Here’s a little local music news scoop, by the way: Ballyhoo has been rehearsing for a possible reunion show at this year’s Homegrown. Get ready to party like it’s 1999, though not the way Prince intended.) Rest in peace, Backstage and Red Lion. What was bizarre about Backstage is that there was always a velvet rope set up on the sidewalk out front and a thug working the door, as if throngs of people were supposed to line up and beg to get in, which never came close to happening.

R.I.P. to RoundAbout Records, too. The Ripsaw moved into an office in the Temple Opera Block in March 2000, right above RoundAbout. The photo below is from March 11, 2000. Brad Nelson and Cord Dada, publishers of the Ripsaw, are sorting through the archive of old issues about three weeks before the first weekly issue came out. I am not a huge sports watcher. I like the Vikings, I appreciate the Twins and once in awhile I...