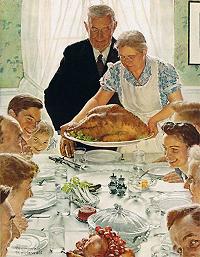 Allow me to once again lead the PDD Thanksgiving prayer. I’ll go ahead and take friends, family and food for granted as usual.

This year I’m most thankful for dentists, particularly the one who is finally going to fix my cavity next week.

I’m also thankful for Minnesota Care and Delta Dental, which aren’t necessarily the best friends of dentists, but are a big help to me.

I’m also thankful for people who won’t turn the comments to this post into a bitter debate about health care, even though I kind of provoked them.

There. Now what are you thankful for?

Off the Wall Artist Market

Come to seventh annual holiday celebration of art, food and music at the Historic Trade and Commerce Marketplace at Hammond...