There’s no shortage of subjects to shoot in our area, and photographer John Keefover is taking them all in. From landscapes to live performances to product shots, he’s turning out stunning images regularly, and always working on sharpening his skills.

JK: My name is John Keefover. I’m a Freelance Photographer here in Duluth going by the name of Keefography. I created this small photography business recently in May of 2019. Since then I’ve been extremely grateful for all of the support I’ve been shown starting this new venture. Though I’m humbled by the realization that there’s always room for improvement every time you pick up a camera, and also because of my self-deprecating humor. I think that latter part is mostly just a by-product of being a Vikings fan, or rather a Minnesota sports fan in general… Anyways, as a freelance photographer I dabble in a wide variety of genres including (but not limited to):

Landscapes. Northern Minnesota is beautiful, offering some of the best hiking trails in the area with the Superior Hiking Trail that follows along the North Shore. I enjoy being out in nature and sharing my experiences with others, often times with a short story to go along the image to really pull you into the scene. Landscape photography is great because no matter how many times you go to a location it’s always different. There’s lighting ranging from sunrise to sunset with cloud cover that brings various colors and moods. The unpredictable Lake Effect weather can also bring massive waves, Northern Lights, lightning, blizzards, rainbows, and other unique situations. The different seasons and transitions in between add a whole new dimension as well. Get outside and enjoy it as much as you can or follow me for the next best thing! Kingsbury Creek: A long exposure of Kingsbury Creek which flows along the SHT into the Lake Superior Zoo. The roar of the waterfalls mixed with the roar of a lion as I took this photo.

Concerts. Music has always been a major part of my life, although I don’t know how to play any musical instruments… I always joke around with band members that I take photos of people with actual talent! However, my images have been selected for the Homegrown Photo Show every year since I’ve moved to Duluth, so maybe I do have some talent after all? Photographing live music is rewarding due to the challenging nature of low lighting, fast movement, the crowd, and other random factors like beer spilling all over your gear at the most inopportune time. Up front next to the stage or in a mosh pit, capturing those special moments and raw emotion brings me a rush that only a camera can share. Like the looks bandmates give each other during a solo, a hint of a smile after a song when the audience goes wild, jumping and dancing on stage, an array of heartfelt lyrics, and the crowd’s reactions to it all. I also cover other events and sports as well. deM atlaS: I was waiting for the beat to drop and for deM atlaS to pull off his patented moves at this concert at Earth Rider Brewery.

Brands. Up until recently I was the Social Media Manager & Photographer at Ursa Minor Brewing. It started as an internship at first building up hype before they opened and creating the voice of the new brewery that is now celebrating a successful first year of operation. That experience taught me a lot about the marketing aspect of business and connecting with your target audience. I’ve applied that knowledge to the launch of my own company and am now offering the same services to other local businesses in the area! Having photographs that stand out in the rapidly growing online marketplace really makes a difference with your advertising and engagements. Lemondrop: This was a product shoot for one of my favorite beers to come out of Ursa Minor Brewing, along with my handmade Bob Husby mug for the Mug Club.

Portraits. Like I was saying about landscapes earlier: Duluth is beautiful! Let’s take advantage of that by using what nature has to offer for a background to create some extraordinary outdoor portraits for Families, Graduation, Business Headshots, Pets, Engagements, or just because you want to feel good about yourself!

Basically, I try to capture everything that is Duluth. Even though I promote myself with my photography, it’s also about supporting others in the community! Support your local artists, athletes, musicians, businesses, and people in general. 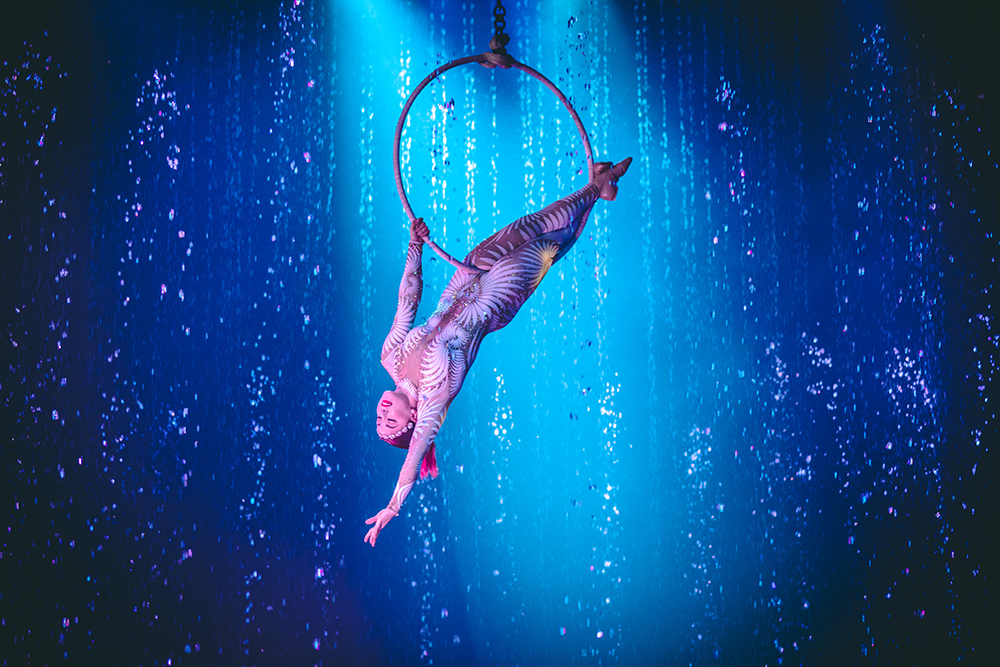 Cirque Italia: Covering the Cirque Italia performances recently in their tour through Duluth. Not only was it an amazing show, but the lighting, water, and action made it incredibly fun to shoot.

I got into Photography as a young punk back in middle school, who used to take photos and videos of friends skateboarding, BMX biking, playing music, and simply goofing around on the Iron Range in Hibbing, MN. I even made a crude, angsty zine called “Can’t Afford a Ride” that I used to pass out at school, as well as editing video parts under the same name. Though my skills were lacking at the time, the passion was definitely there! 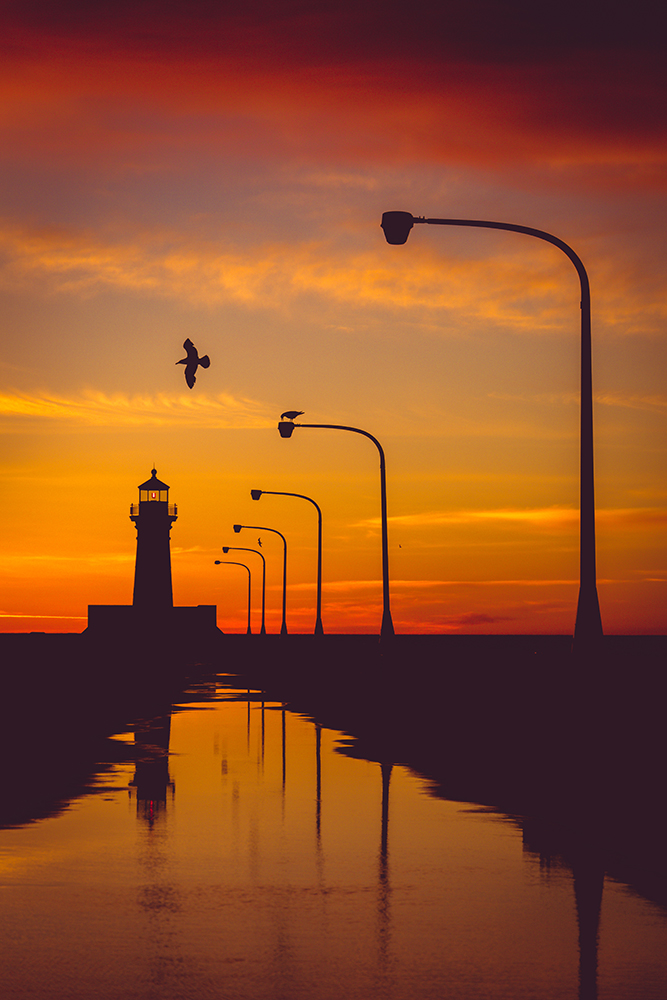 Canal Park Sunrise: Photographing this old icon never gets old. The reflections and the birds at sunrise make this image feel almost poetic.

I went onto learn more about Photography and developing film in the High School darkroom. Not long after I graduated, the Hibbing High School ditched their darkroom paving the way for digital cameras and cell phones. I’m glad I was able to get that hands-on experience working in the darkroom to really understand the fundamentals of photography and film processing, which I apply to my digital workflow today. 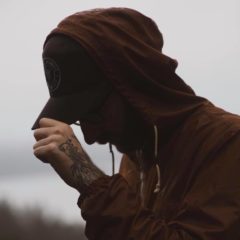 During the summers off in High School I attended summer classes at the Minneapolis College of Art and Design, where I later went to school as well. In these classes I worked as a team with other talented students directing, shooting, editing, and producing music videos for local bands in Minneapolis. One of the bands was Friends Like These, which went on to form Communist Daughter. That was a live music video filmed at the 7th Street Entry at First Avenue, where we got to take a private tour of the famous venue. I was 16 at the time, and that was an awesome experience seeing all of the memorabilia and history from some of my favorite bands that have come through there. The next year we worked on a music video with Twin Cities Hip Hop group Heiruspecs. We filmed it at Central High School in St. Paul where they had formed the group when they were all in school. Those guys really got me into Hip Hop as they shine as a live band rap group with keys, drums, bass and guitar. I’ve been a Hip Hop Head since then, especially when it comes to the Minnesota scene. Lately I’ve been having a nice working relationship with Rhymesayers Entertainment exchanging photos of their artists that come through Duluth. The other band I worked with was The Idle Hands. That video was actually created with the help of the Producers from Napoleon Dynamite! It just so happened that I dressed as Napoleon for Halloween that year and really pulled it off too… Working so closely with those bands at such a young age really inspired a lot of my gravitation towards concert photography now.

After school, photography was always just a hobby of mine. It wasn’t until these last few years that I’ve really hit it hard and decided to pursue it professionally. I had been content working in the food service industry for most of my life, but I’ve decided to follow my own career path doing something I really enjoy for myself, and with much less stress.

As an up-and-coming photographer, I try to get behind the camera as much as I possibly can. That’s really the only way to progress as an artist, and to get your name out there. There have been many sleepless nights waking up early for the sunrise, while staying up late for the sunset and night sky, with lots of trial and error in between. When I’m not out in the field I’m usually listening to a Photography Podcast or watching YouTube Photography Vloggers so that I’m just constantly thinking about it, and learning new techniques to use in camera or in post processing. Sculpture Milky Way: This sculpture at the Split Rock River wayside rest made for an interesting foreground with the Milky Way rising right above it.

I’m working on a collection of canvas prints that will be on display in galleries around Duluth. First, there will be a few hanging, and for sale, at the Back Alley in the Lincoln Park Craft District soon. These prints were made locally at the Tischer Gallery downtown, so in buying one of these prints you’d be not only supporting my work, but another local photographer’s work as well! Online you can find some of my photography on my website: https://www.keefography.com/, Instagram: https://www.instagram.com/keefography/, and Facebook: https://www.facebook.com/keefography.

As a Landscape Photographer I’m always looking forward to the next trip, the next adventure. With fall seemingly and very suddenly here, my next photography trip is up the North Shore. I’m thankful to be working with Odyssey Resorts, who will be providing me with a great base camp to document the changing leaves and shifting seasons around the Grand Superior Lodge in Two Harbors, and Caribou Highlands in Lutsen.

An exhibit coming up I’m really excited about will be at Pizza Luce next July. It means a lot to me not only because it’s a popular place where lots of people will see my prints, but because I used to work there as well. Every day I would see and appreciate the rotating artwork from other local artists while I was making pizzas. Although it’s not until next year, I can’t wait to see my own photos on display there!

I’m always looking for new opportunities to get out and shoot, and people to collaborate with, so if you’re interested feel free to send me an email at [email protected] to see what we can do to work together! Like Old Lifty, we must lift each other up in the community. Ok I’ll stop after that one.

Thanks for reading, and following along,

Postcard from the Pier in Rough Weather