Scott Davis, left, and antique dealer Andrea Blesener stand outside the historic E.F. Burg Hotel Supply store at 20 W. First Street. Davis has placed the 1896 building up for sale and Blesener is selling the huge antique collection stored inside.

A local woman is scrambling to organize and price a horde of antiques, including a massive mid-20th-century electronics collection, stored in a former downtown Duluth trophy shop before owners sell the historic property.

Antique dealer Andrea Blesener will hold the second in a series of estate sales at the E.F. Burg Hotel Supply building, 20 W. First St., beginning at 10 a.m. Aug. 4-6. The sale will include a variety of old and unusual items collected and stored by former building owner Hugh Morris, who saved everything from his two generations of ancestors.

“We’re going to be holding occasional sales here every month until we sell it all,” said Blesener, as she and a team of workers stocked shelves and filled floors with antiques discovered inside the building. A first sale in mid-July drew hundreds of people but barely put a dent in the overwhelming collection.

“We’ve been working on this for six weeks, digging into piles, unearthing stuff that hasn’t seen the light of day in years,” said Blesener. “It’s just a huge, huge, huge amount of stuff, we don’t even know what we all have yet. It just goes on and on.” 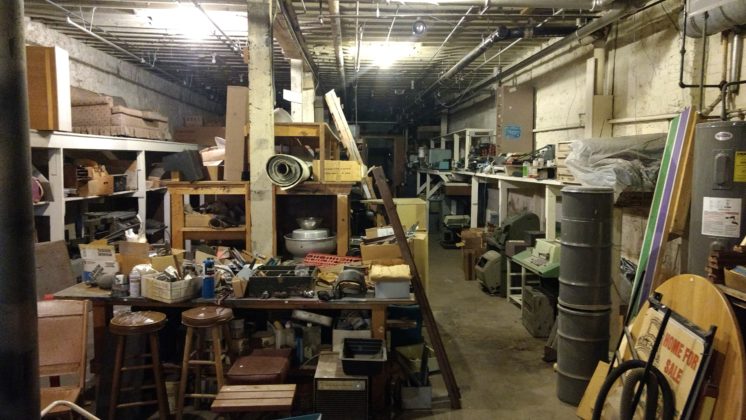 Piles of antique electoric items were stored in the basement of 20 W. First St. Workers took weeks to prepare the items for sale.

Morris owned and operated Glenwood Signs and Awards out of the First Street building for decades. A former electrical engineer, he had an interest in post-war electronic hardware. Radios, televisions, teletypes, microphones, speakers, telephones and all the dials, tubes and gadgets needed to keep them running where stockpiled in the trophy shop basement and second floor.

Blesener said Morris also stored an antique collection compiled by his mother and grandparents, who had items dating back to the Civil War era. Vintage furniture, art, maps, clothes, books, magazines and countless historic items have all been found in the old trophy shop and family storage areas. “I’ve added a garage full of stuff to this sale that came from the same collection,” said Blesener. “Some of it goes back to the 1890s and beyond. They kept every scrap of paper. Everything. It’s just nuts.”

Morris died in 2004. The business and building was sold to longtime Glenwood employee Scott Davis, who maintained operations around the stored antiques until he decided to sell his holdings in 2017. Glenwood Signs and Awards was recently purchased by Dean Moore, who moved business operations to 4151 Haines Road.

Blesener gained control of the stored antiques from the Morris family as Davis prepared to sell the building.

According to St. Louis County records, the brick structure at 20 W. First St. was built in 1896. The building has a basement and two upper floors with a total square footage of approximately 5,000 square feet. It sits in the middle of the Duluth Commercial Historic District next to the former Young at Heart record store, another empty historic property for sale.

Duluth Rotary historical records show that Edward F. Burg moved his hotel and billiard hall supply business to the address in 1906. Davis said Morris opened his trophy shop next door in 1988 and bought 20 W. First St. from the Burg family in 1993.

“We’re refurbishing a building that’s been neglected too long,” said Davis. “It was time to make some improvements and put it up for sale.”

Contractors have installed a new roof and front facade. Signage was removed as part of the project and exposed the old E.F. Burg Hotel Supply sign.

Blesener said she hopes it takes a long time to sell the property. Monthly occasional sales will continue until the Morris collection is cleared out, with other antique dealers adding stock as floor space opens up.

“I wish I could buy it, I really do,” said Blesener. “It’s my antique store for now.”

The undated postcard above depicts the long-ago view facing south on Central Avenue from Ramsey Street. The modern image below...