Dann Matthews is a designer and illustrator who blends pop-culture knowledge, humor and sharp skills into a mashed-up style for print, product design and more.

D.M.: Most of my work is digital. I’ll sketch and scan an illustration and finish the piece in either Adobe Photoshop or Illustrator. I have done a ton of designs prepped for screen printing, so I’m most at home in Illustrator. I started designing tees for Threadless.com’s ongoing T-shirt design competition back in 2005. It became my hobby, then my obsession, then my side-hustle. I would usually create 4-6 designs a week and never use two of them for anything.

I don’t think my style has emerged yet. Or if it has, I remain oblivious — which is good — otherwise I’d second guess everything I did. Nictenstein travel mugs
I illustrated some of Nic Cage’s more animated faces in Lichtenstein’s pop-art style to make myself laugh. Now I put them on as many products as possible because it’s even more ridiculous as a shower curtain. 🙂

I fell in love with Adobe Illustrator at DBU back in 2005. I think I was the only person in my design class who even liked working with that program. It’s so detailed that it’s really easy to get into the creative flow and lose hours of your life and ruin your bladder. How to Train Your Bat
I love tweaking logos and hiding Toothless in the Batman symbol was a fun exercise. The biggest challenge has been remaining interested in designing after the latest trend of thieves who sell other artists’ work and often make more money than the artist. I’ve had a couple designs go “viral” and it just made my work an easy target. Despite this, it’s always rewarding to see a picture of a design I made in public or on Reddit. 🙂 After many failed logos, I finally landed on my cyan/black and white cartoon head combo. I’ve liked it as a “living” logo that I get to dress up, mess with and destroy as I see fit.

My website, danndesigns.com has links to all my shops and social media rig-a-ma-roll. I sell tees, mugs, pillows, stickers, shower curtains, etc. on a number of sites. 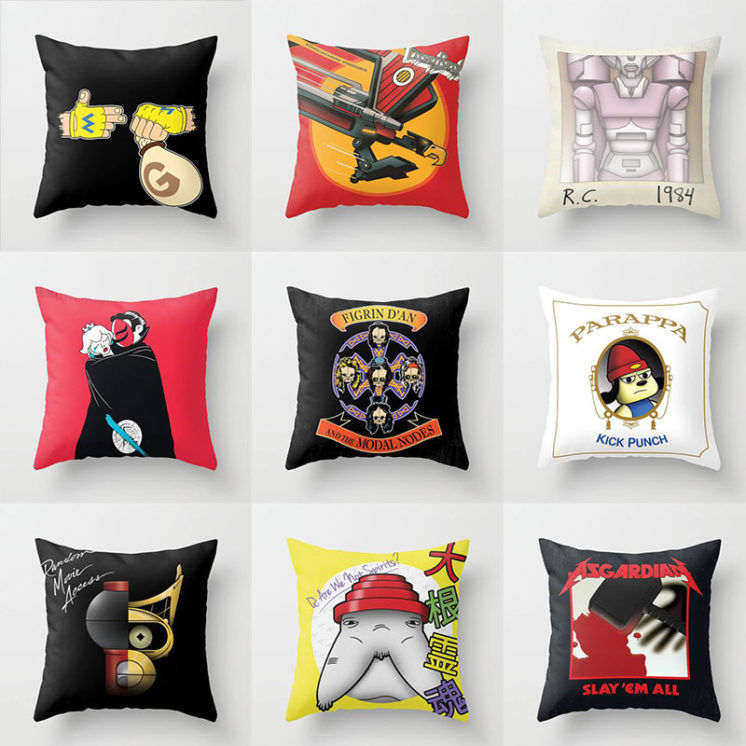 Album Cover Redesign pillows
I created a slew of album cover parodies and then I put them on pillows. Look at those fluffy parodies! Woo!

I would love to take part in another art exhibit. I’m honestly hoping to get back into music. I used to write punk songs as often and quickly as I designed. The dream is to record an album with my wife and daughter and never share it with anyone. Anti-platinum. Nerd Nite poster
I’ve been working with the Nerd Nite folks for years now. It’s my near-monthly challenge to visually string the three wildly different presentation themes together. I don’t know that I’ve nailed it every time, but it’s really satisfying when I think I’ve hit on it.