Jeff Lemke operates a web site, Twin Ports Rail History, and Flickr account where he posts photos he has taken as well as photos he has collected documenting the history of the rail business in Duluth and Superior. We are showing a very small sample of the images here, but you really need to check out the collection he has, as well as read his descriptions for each photo. If you are so inclined, you can also donate to keep the project going. It really is an impressive historical collection.

J.L: Most people look at my site and think it is about trains. Perception is reality in most cases. But for those who actually look closer and read the details of each image that I post, they discover that it’s really a developing story in pictures about the people who worked for the railroads and the industries that those railroads collectively served. The locomotives, railroad cars, and facilities that each railroad used were in a constant state of flux—right from the beginning. During the late 1880s railroads like the Northern Pacific and Great Northern established strongholds of land in Duluth and Superior respectively, on which they built their inland-port empires. Other railroads came along, prospered too, but to a much lesser degree. 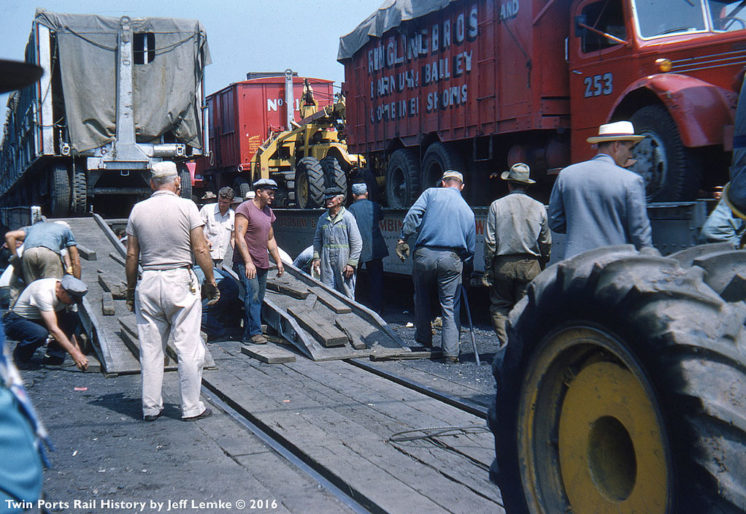 The first two major lines had financial backing from strong-willed financiers and industry king-pins who worked diligently to all-but-monopolize the small amount of existing land. Duluth was just a narrow shelf on the Minnesota side of the harbor. Rice’s Point was but a narrow spit of land barely half as long as it is now. So when that land was consumed with railroad tracks and freight buildings, developers dredged sand from the bottom of the bay and used it to push new land further out into the water. Dozens of new tracks were built on top of thousands of wooden stilts so that these new tracks and their adjacent docks could serve an increasing number of boats and ships arriving here from the lower Great Lakes. 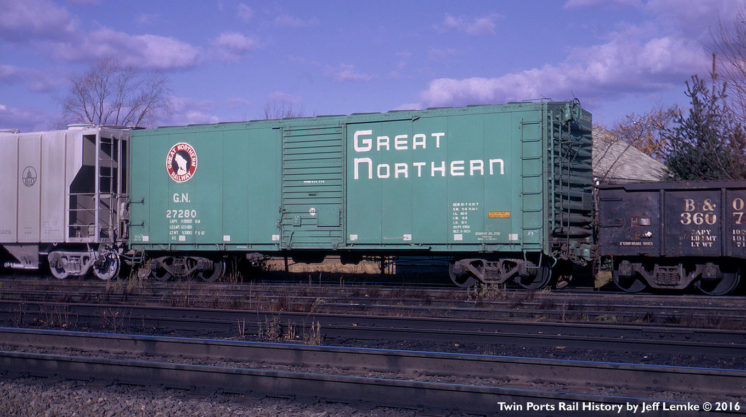 Almost as soon as these early rail and water connections were developed, commerce in the area blossomed. Businesses large and small popped up everywhere—from Proctor to South Superior, and from Carlton to Endion. The central heart of this greater terminal district was Duluth-Superior and every railroad that operated here interchanged rail cars with each other to move virtually any load anywhere it needed to go in North America. That complicated and tangled arrangement of train tracks was built, maintained, and operated by thousands of men and women who worked in the offices, depots, roundhouses and back shops that once dotted the landscape here. Meanwhile, people working on-train such as the conductors and engineers, firemen and brakemen, dealt with passengers, freight, live stock, and many different kinds of cantankerous railroad equipment to provide essential transportation services throughout the Twin Ports. 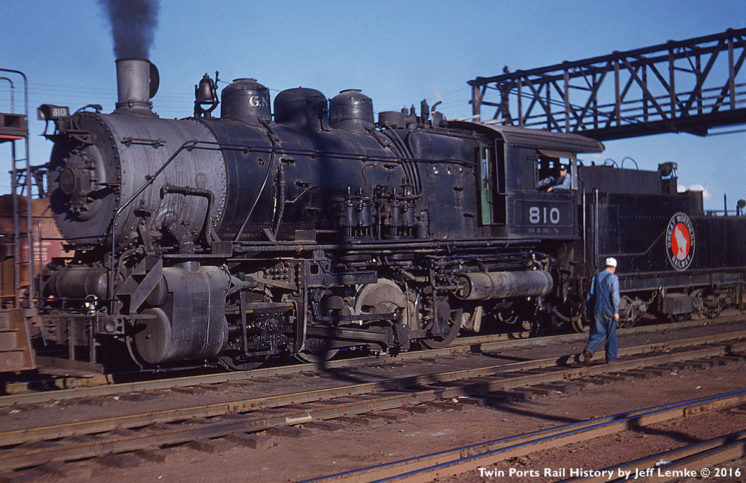 There are thousands of small stories to tell that will describe how these things came to be and what it was like to work for these railroads during an earlier time. It is my personal goal to share as many of these pictures and stories as I can so that others can better understand just how great this community was at building something from nothing, within the technological constraints of those times, that quickly made Duluth-Superior a remarkable transportation hub. While what remains today of this grand past pales in comparison to its former self, the rail and commerce facilities of a modern Twin Ports owe their very existence to the early efforts of men and women who came here in the 1880s looking for jobs to be able to build for themselves and their families—a better and brighter future. 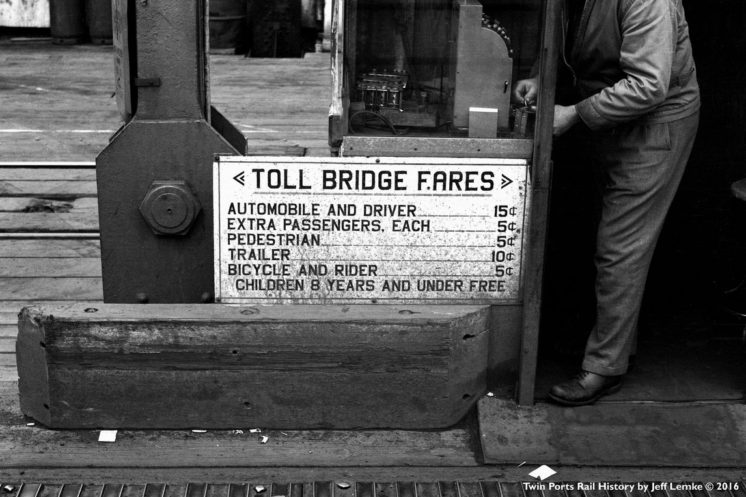 My project is about understanding each little piece of a much larger transportation system that helped to build out this community. I believe that there is value in re-discovering these things about our collective past. When Grandma tells us, “I used to work the IBM 402 machine at 17th Street”, or when Grandpa says, “I classified ore cars so that they could be loaded into the top of that ore dock,” wouldn’t it be nice to know what that actually looked like for them in their time? I think so. That’s my mission at Twin Ports Rail History. To find and restore old pictures, collaborate with people who can help me identify everything that I see in these images, then connect them with people who worked in these scenes from the past. It’s definitely about much more than just trains. The bigger picture is to tell stories about people, and the machines and methods that they used, to manage an ever-changing landscape of transportation services over the last 135 years at Duluth, Superior, and surrounding communities too. 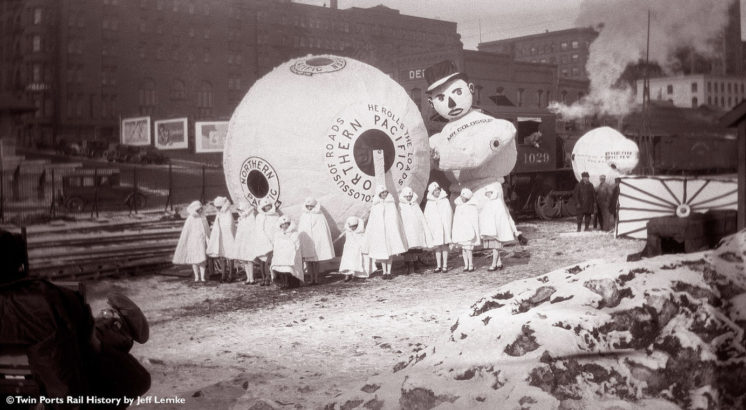 Northern Pacific’s “Mr. Colossus of Roads” in Duluth, Minnesota about 1930 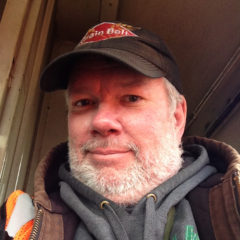 All of the pictures that I am sharing started as chemically developed photographic film. This includes a wide variety of sizes and formats but much of it was traditional 35mm. I began making and collecting images in 1975. About 2002 I set down my trusty Canon and Nikon cameras for the last time. I stopped taking pictures to be able to make use of all that I had collected up to that point. I learned how to scan and correct images digitally inside of my computer. As important as that discipline is to creating my art, learning how to output those images is even more critical to sharing anything digital and is often an overlooked facet of this kind of (for lack of a better term) historical preservation. Scanning only gets an image onto your hard drive. The real magic happens after that work is completed. Getting great results is very much about trial and error, persistence, and consistent work flow. I’m still learning as I go but so far, people seem to be enjoying my brand of historical art, almost as much as I enjoy creating it.

DSS&A Flour Train at Duluth, Minnesota in 1889 by Gallagher

My railroad photo stories can be found at Tony Dierckins’ site, Zenith City Online at: zenithcity.com

My historical image art can be found at: flickr.com

I am a federally certified railroad conductor for the last 13 years after a like number of years working to optimize work force productivity within the high technology sector. I’m hoping to find a way to retire early to be able to do this kind of historical work full time.

Here’s a link to my personal story about What We Do with a variety of links including my LinkedIn profile: twinportsrailhistory.com/what-we-do

John Gregor is in Iceland. So beautiful.