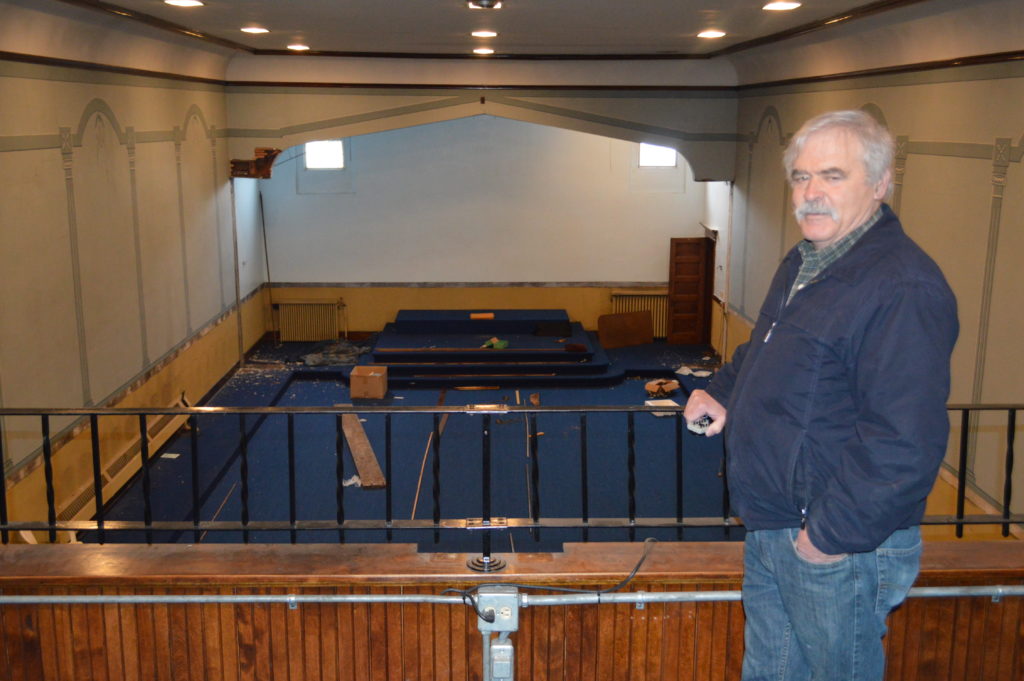 Real Estate agent Jim Aird in the balcony of the old Euclid Masonic Lodge in West Duluth. Aird’s grandfather was a member of the fraternity and had a room named after him in the building.

An historic and mysterious West Duluth building has stood abandoned for a decade after an ancient fraternal organization sold the property to a developer who died before initiating a renovation.

Euclid Lodge 198 erected the boxy, brick and largely windowless building at 611 N. Central Avenue in 1909, a period of great growth for the centuries-old, international fraternity of Masons. During its almost 100 years in operation, some of the most prominent West Duluth businessmen and civic leaders of the time participated in secretive ceremonies, jovial fellowship and benevolent works inside its walls. 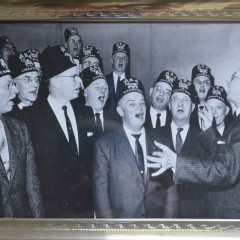 Euclid Lodge 198 Masons gathered for fun and fellowship at their Central Avenue building, as shown in this undated photo found left behind in an abandoned office.

But declining membership forced Euclid Lodge members to sell its headquarters in 2006 and consolidate with the downtown Duluth Masonic Temple.

Developer Ray Envall purchased the property with plans to renovate it into office and condominium space. Envall died in October 2013 without starting the project and the aging structure has languished on the real estate market ever since.

“It’s kind of an unusual building,” said Duluth attorney Ron Envall, who inherited the property when his father died. “It’s got these neat old stairs that go up to a balcony and overlook what was really an ornate room –  that back room – where they must have conducted their meetings.”

Indeed, the showpiece inside is its grand hall, a room slightly smaller than a regulation basketball court. The space is still covered with royal blue carpeting and features Roman columns painted on its walls. Actual 12-foot columns, which flanked an elevated front stage, were removed along with the original wood doorway and mopboard trim years ago.

The building also features a large, lower-level social hall with a kitchen 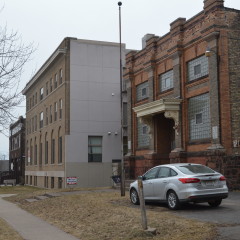 The Euclid Lodge 198 stands next to a former YMCA building on Central Avenue in West Duluth.

and restrooms. Upper floors include a collection of offices, meeting space and staging rooms were Masons prepared for their secret ceremonies. Old momentos, file cabinets, used furniture and nondescript debris litter many of the rooms.

“He had bought it with the idea of renovating it,” said Envall. “That was his passion. He was always looking for old buildings and then renovating them into other uses, usually residential.”

As a developer of historic properties, Roy Envall converted the Calumet phone building to apartments and renovated an old Gary-New Duluth paint factory into the 24-unit River Place Condominiums.

“When I sold him the Calumet building, I had no idea what he was going do with it,” said Aird. “When he was all done I was just amazed at what he did. It was all in his mind. No one else could see it.” 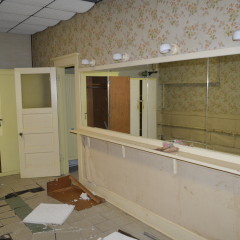 The entrance to the women’s restroom in the lower level social hall.

Aird shows the property for Olafson Genereau Realty. He said the masonic temple needs another visionary buyer. The building is structurally sound, said Aird, but requires expensive upgrades like an elevator to meet handicapped accessibility laws and windows for any apartment or condominium construction. The building is also due for a new roof.

Office and residential isn’t the only option for the property. The space could be used as a church, a dance studio, art gallery, music studio, even a boxing ring or gymnasium, said Aird. About 30 groups or individuals have looked at the building.

Artist Karin Kraemer operates Duluth Pottery, Superior Division in Superior’s Trade and Commerce Building. She recently looked at the property for a possible business expansion. “I didn’t really think it would be a great fit, but wanted to see it,” she said. “It’s huge and would be great as a theater or music venue (but it) needs work. It’s really interesting though.”

Duluth Masons hope something can be done with the building too.

Retired 6th Judicial District Judge David Bouschor, who joined the Euclid Lodge in 1958, said the decision to sell the building was difficult but declining membership and an abundance of Duluth lodges forced consolidation.

“A lot of the people, especially the older guys, were really unhappy that there would be no lodge in the west part of the city,” he said. “But Duluth had seven masonic lodges and we really didn’t need seven.”

About 50 years ago, the Euclid Lodge boasted membership between 700 and 800 men. Those numbers dropped significantly starting in the 1970s, but renewed interest among young people has pushed membership up slightly to about 300 today, said Bouschor.

Bouschor said starting with his grandfather, five generations of his family have served as masons in Duluth. The fraternal organization is known for charitable works, primarily with the Shriner’s children’s hospitals.

Bouschor served as the Euclid Lodge Grand Master when the organization dedicated a building cornerstone in 1988. He was also there for the painful debate to close and sell the property 10 years ago.

“It breaks my heart to see it sitting there,” he said. “It’s got a lot of old memories and I just hate to see it sit there derelict.”