The view from the fourth floor of DeWitt-Seitz Marketplace is amazing. Outside the windows are the icons of Duluth: Lake Superior and the Aerial Lift Bridge. On the inside sits Mike Furo, quietly bringing new life to old musical instruments as the owner of Rosewood Music.

Furo grew up in Duluth and has been looking out Rosewood’s window for a dozen years. He got his start working for the previous owner, Randy Axelson. Back then Rosewood was more about buying and selling instruments than fixing them. As an apprentice, Furo worked for Axelson on Saturdays for four years, until Axelson married and left Duluth. 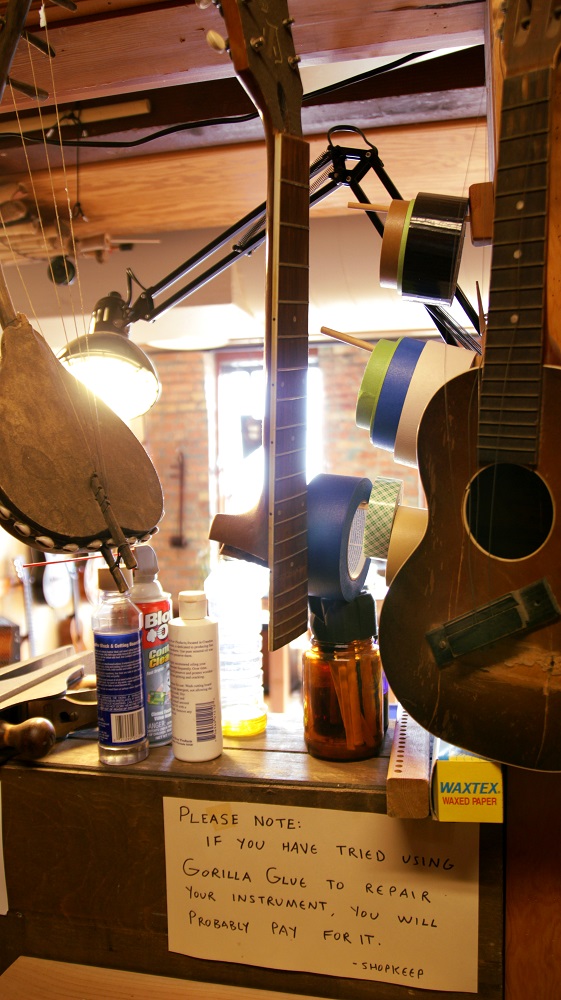 Furo took over and has turned the business into a successful repair and restoration studio. He said about one-tenth of the shop’s revenue come from sales. People travel from Canada and throughout the Midwest for Furo’s help fixing or restoring their beloved instruments. He said the most unique item he has taken in was an 1801 flute made of wood and elephant ivory. His favorites are the old guitars — handmade and unlike anything sold today. He said he has repaired instruments valued as high as $70,000.

Sitting in Furo’s shop are 50 cased instruments he has been working on in some capacity; each has a different problem. The pace can be hectic, but it’s also a job that comes with a level of solitude. There are seldom many people in the shop.

Furo was raised a musician, mostly playing piano. He has performed publicly on occasion, but said he prefers to “wake up early and play with a cup of coffee, not at one in the morning.” He has played piano, guitar, clarinet and other instruments — and over the years people have come to assume he knows how to repair them all. Kyle Ollah recently joined Rosewood Music as an apprentice. He said he’d been “bugging” Furo for years about the possibility. The two had previously collaborated in the band Yester, which performed at Duluth’s Homegrown Music Festival two years ago. Ollah takes on two projects at a time at Rosewood, with guidance from Furo until he can figure things out alone.

Rosewood Music is a quiet place, where music is literally made and remade. It is comprised of wooden walls covered in particular tools. There are guitars, sitars, banjos and mandolins. And while the small rooms that make the shop hold but one experienced craftsman, the knowledge inside is immense. When the door to Rosewood is open, wondrous things can happen. Bell Helmets is awarding $100,000 to fund a trail-building project in one of nine U.S. cities in the latest online...