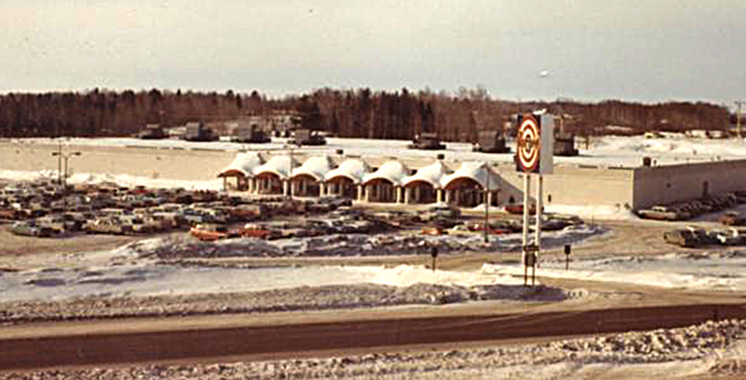 Built in 1962, the Duluth Target store was one of four Targets built in the company’s inaugural year. Roseville was the first store; the other two opened in St. Louis Park and Crystal. Target President Doug Dayton said the new stores would, “combine the best of the fashion world with the best of the discount world, a quality store with quality merchandise at discount prices, and a discount supermarket.”

In 1961 the Daytons announced the plan for new discount chain of stores. “Shopping at the new, currently unnamed store will be fun, delightful and welcoming to the entire family. The stores will include wide aisles, easy-to-shop displays, fast checkout and loads of well-lighted parking … for 1,200 cars.”

They had over 200 ideas for names and ended up choosing the bulls-eye logo because “as a marksman’s goal is to hit the center bulls-eye, the new store would do much the same in terms of retail goods, services, commitment to the community, price, value and overall experience.”

Evolution of the Target logo.

Photos of the old Target in Duluth before the 1982 remodel.