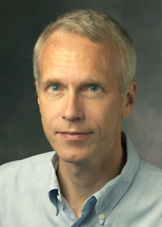 Brian Kobilka, a 1977 UMD Chemistry graduate, has won a share in the 2012 Nobel Prize for chemistry. Dr. Kobilka can be heard in an interview with a representative from the Nobel Organization at nobelprize.org.

Dr. Kobilka is pictured below in this 2005 photo after being inducted into the UMD Academy of Science and Engineering (and possibly after having been goosed by former Chancellor Kathryn Martin, a speculation that I am basing purely on the look on his face and his proximity to the chancellor in the picture.) All kidding aside, it sounds like his research has saved lives and aided in the production of many medical treatments. This is a wonderful feather-in-the-cap for both Duluth and UMD. I expect a mayoral proclamation, a TED talk-like lecture of some sort, and (I hope) 1970s-era Duluth photos of a bearded, pooka-shell-necklace-wearing Kobilka to emerge soon.

Is there a decent local option for web hosting in the Twin Ports?