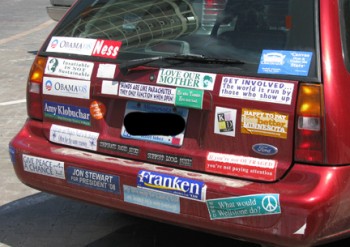 I don’t recall ever seeing a car covered in bumper stickers that wasn’t expressing a liberal-leaning point of view. And I don’t recall ever seeing a sheet-of-plywood sign painted in block letters posted outside someone’s home that wasn’t expressing a conservative-leaning point of view.

Feel free to share your own examples and offer theories on why this is or is not true.

A couple weeks before actual Homegrown, way down yonder in a town called Winona, there's a music festival happening called...