She Gets Things Done 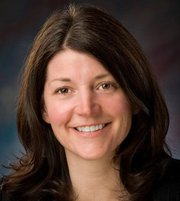 On Tuesday, November 15, after a long day of working on my unfinished, but indisputably kick-ass, novel, I cracked an adult beverage and logged onto the Internet to make my usual rounds.

On Perfect Duluth Day, I found a post by City Councilor-elect Jennifer Julsrud, titled “Duluth’s Plumbing Needs Big Fix,” regarding Duluth’s aging water infrastructure. Accompanied by a short YouTube video (serious people talking seriously about water, serious music playing in the background), the post listed a series of upcoming community meetings that were to be held on the subject.

Naturally, this irritated me greatly. As far as I was concerned, this was just the latest example of Duluth’s tendency to be serious one minute about issues that actually need attention, and the next minute to stampede giddily off in pursuit of unneeded, but very expensive, luxuries that we want RIGHT NOW-as if the money we spend on the luxuries has no relation at all to the money we need for necessities.

To illustrate this point, I made three comments on the post. They read as follows:

COMMENT #1: Let’s sell the NorShor Theatre for a few million. That should cover it.

COMMENT #3: And now you can skip all the meetings.

Satisfied that I had made my views known in a way that satisfied my inherent need for sarcasm, I put the matter behind me and went to bed.

The next day, however, as I scrolled through PDD, I was surprised to find that the water utility post had no comments attached to it. Puzzled, I emailed the PDD moderators to ask what had happened. I was thus informed that my comments no longer existed because the author of the post, City Councilor-elect Jennifer Julsrud, had flagged them as spam and removed them.

I blew a gasket. Getting censored by a government official was bad enough, but to be flagged as spam enraged me. My comments may not have been overflowing with niceness, but they made a valid point, and nobody who has read anything I have written on PDD and elsewhere would be the slightest bit surprised by them. It’s my style, dude. You can’t censor people based on their style.

Seeing the House of Donuts post makes me wonder ... what's going on with the Hacienda del Sol?