Fond du Lac Band’s 89.1 FM WGZS “The Moon” was one of several Native American Radio stations mentioned in a report on MPR News this morning.

I have been aware that the station was coming to the airwaves for more than a year now and I have been listening randomly since it signed on in September. They are literally building the station from the ground up, and a week or so ago I noticed that the budding station had powered up enough to reach much of Duluth. It’s occasionally scratchy but I can pick it up at home in the Hillside and around town in the vehicle.

To me, it’s awesome. It’s very raw, and real. There are no commercial interruptions which is enough to recommend it right there (not that there is anything against commercial radio). The programming consists mainly of 70s and 80s rock, although when it signed on in September, it seemed to be dominated by deep Motown and soul cuts from the 60s. And just yesterday I was listening and there was some old time country. Really, it’s random. There are always some traditional Native American tracks sprinkled in and I expect more and more homegrown music and public affairs programming as they get their footing. From what I’ve personally observed, spoken word programming consists mainly of an introduction to Ojibwe language (priceless) and I did hear one interview about a community event that was upcoming. My recommendation is to set 89.1 FM on your car or home presets and give it some time. 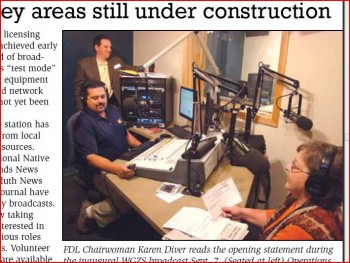 The FDL Tribal Newspaper did a story about it in the October 2011 edition. Click here for a PDF.

The 2012 DFL District 8 Congressional Candidate Forum coordinated and moderated by Minnesota Public Radio has ended, but the full...