Duluth’s Pine Knot Cabin on Minnesota Point: Its History, its Removal and the Future of the Land 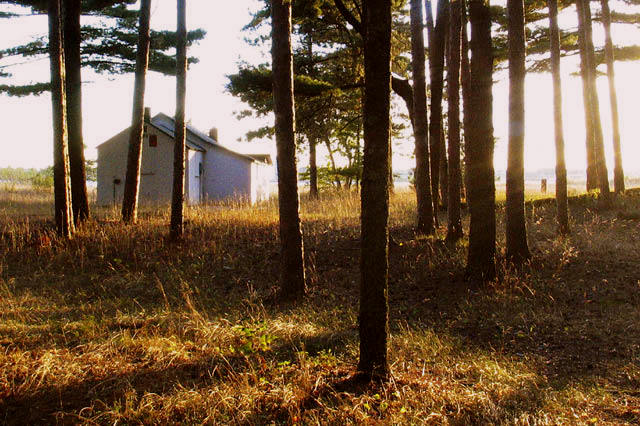 The removal of the Pine Knot Cabin on Minnesota Point raised a lot of questions and caused a good deal of speculation among Duluthians. To clear up some of the facts, Perfect Duluth Day interviewed Steve Wilson, regional Scientific and Natural Area specialist for the Minnesota Department of Natural Resources.

Why was the cabin removed and what’s the deal with the DNR’s SNAs? The answers are below.

First, some background on the Pine Knot cabin:

The part of Minnesota Point just southeast of Sky Harbor airport was known as Peabody’s Landing in the early 1900s, and there were numerous cabins there. The name Peabody’s Landing comes from the ferry service run by Charlotte and John Harry Peabody, who lived on the point. Most of the cabins were owned by people from Superior, and the Peabody’s ferry crossed the harbor to transport them.

Pine Knot is said to have been built in 1900 by Superior Mayor Charles O’Hehir and sold to the Pollock family in 1927. It is not known for certain if the structure that was removed in 2010 dates all the way back to the turn of the century; some believe the original Pine Knot was destroyed by fire and replaced.

Ed Pollock, great-grandson of the Pollocks who acquired the cabin, commented on PDD in July. “Please do what you can to save Pine Knot,” he wrote. “It was never added onto during the years we owned it. I have a picture of my dad’s family sitting 4 feet from the front porch with their feet in the bay. You see, the bay was dredged during the depression and that is why all the front yard there. Pine Knot used to be just a few feet from the bay.”

The Pollock family donated the cabin to the city in 1999.

What parts of Minnesota Point are part of the Minnesota Dept. of Natural Resources Scientific & Natural Areas program?

It’s basically the 18-acre area southeast of the Sky Harbor Airport. It does not include the area of the historic Minnesota Point Lighthouse. The border isn’t easy to describe, but perhaps the map below will help. The areas inside the red line are part of the SNA. The lower left corner shows part of the airport runway. How long has this part of Minnesota Point been part of the DNR’s SNA program?

Why was the cabin removed, and why did it happen now?

“We’ve actually been working on it since before (the DNR) owned it,” Wilson said. The land was donated by Superior Water, Light and Power Co., a subsidiary of Allete, to the Minnesota Land Trust in 1998, which placed a conservation easement on it and transferred it to the Minnesota DNR.

“Scientific & Natural Areas are there to protect the best of Minnesota’s remaining natural heritage and features, like rare plants and animals (specifically the old-growth forest on Minnesota Point), significant geological features (like the portion of the Minnesota Point sandbar within the SNA) and so on and so forth,” Wilson said. “A building smack-dab in the middle of one of the most unique old-growth pine forests in the state is just not consistent with the reason we are protecting and managing the area.”

Wilson said there were efforts to preserve the building before the decision was made to demolish it. In 1999 a former Duluth city planner, Jill Fisher, proposed moving the cabin and its outhouse to the Park Point Recreation Area parking lot and converting it into an interpretive center. The DNR even offered the city $5,000 to move the cabin at the time, but the cost of running a new interpretive center was not appealing to the city council, and the idea was cast aside.

“If (the cabin) had been shown to be a historically significant structure I think we could have found another option than demolishing and recycling it,” Wilson said. Its lineage is very murky, and we could never find any definitive evidence that it extended back to the original Peabody Landing community around the turn of the century.”

Wilson said moving the cabin probably would have required floating it across the bay, which would have been problematic. And there was no money available to maintain the cabin, which was deteriorating.

“The building just wasn’t that sound,” he said. “It was a ramshackle thing that had been constructed in pieces, so it didn’t hold together very well. It didn’t have a regular foundation.”

Wilson also had an ongoing battle with people breaking into the cabin.

It appears the equipment that was involved in the demolition and removal might have damaged soil in the area. How was this project handled?

Watters & Sons Excavating of Duluth was the contractor that carried out the project on Nov. 30. Wilson conducted the final site inspection on Dec. 7.

“They came in on an old road, and there was some minor soil disturbance on the road,” Wilson said. “It looked like when they left the site they swung wide on the trail and exposed some soil on what already had been an exposed bank from when the road/trail was originally put in.”

Wilson said the contractors did a good job minimizing the damage, but it could have went better.

“If I had it to do over again,” he said, “I would probably specify that the largest machine have been one to two feet narrower than what they used.”

Wilson said the damage looks worse than it is.

“I would counsel people to be patient,” he said. “After one season of pine needles falling on top of the site it’s going to look more like it did before we removed the cabin. After several years, when a little of the grass that was growing there before comes back I’m fairly certain it will look remarkably like it did before … just absent the building.”

Because the layer of pine needles was removed, Wilson said the DNR will be monitoring the exposed soil to prevent non-native invasive species from popping up.

“There was some tansy growing right next to that cabin that is on our list to go out and remove – and that becomes more urgent now that we’ve got exposed soil next to it.

Are people still allowed to walk dogs and ride bicycles on the trail?

Typically people are not allowed to bring pets or bicycle on trails within SNAs, but the DNR has not been enforcing those rules on Minnesota Point and has no plans to start.

“Our intent always has been to allow those pre-existing uses,” Wilson said. He notes, however, that those uses were not specified in the DNR commissioner’s designation order and therefore were not technically grandfathered in, though that was supposed to be the case. So walking pets or biking on the trail is technically illegal, but the DNR is not enforcing it.

“The only reason we haven’t made those uses legal is we have to hold a public hearing,” he said. “It simply hasn’t been a high priority, but it’s on my list of things to do.”

What could be more perfect than to take an inspirational break from holiday business and stress?  Join us at First...