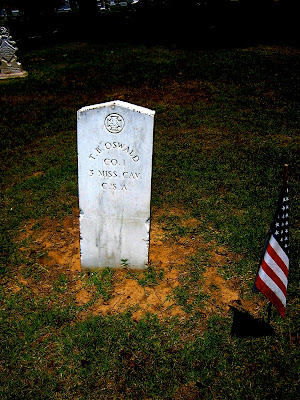 The News-Tribune had a nice editorial Sunday encouraging people to take time out to remember that Memorial Day was intended to include an element of solemnity, paying homage to those who have died in the service of the United States. I’m no jingo, but I generally embrace those sentiments. The editorial board erred in citing the nonprofit usmemorialday.org’s characterization of the origins of the tradition, however: “That inaugural Decoration Day, on May 30, 1868, drew some 5,000 Americans who helped place flowers and flags on the graves of more than 20,000 Union and Confederate soldiers at Arlington National Cemetery,” the group claims, imagining a scene of national reconciliation.

The reality, as historian James McPherson noted, was that “[w]artime rancor remained alive in those years. Controversies arose in the North and South over the decoration of the graves of the few enemy soldiers buried in several communities. During the Memorial Day commemoration at Arlington in 1869, the G.A.R. placed guards around the handful of Confederate graves to prevent them from being decorated.”

As the years passed, the spirit of national reconciliation imagined by the usmemorialday.org authors did begin to develop, and grey-haired Unionists and former rebels began to finally “clasp hands across the bloody chasm,” on Memorial Days and more generally–but only in the wake of a process of collective, intentional amnesia on the part of white Americans, who ultimately preferred to forget what the war had been about. [Which was bitterly ironic, given that the first major organized act of commemoration after the war was undertaken by the African-Americans of Charleston, South Carolina, 10,000 of whom attended a ceremony on 1 May 1865 honoring several hundred Union soldiers who had died in a Confederate prisoner-of-war camp in that city deep in the heart of the Confederacy.]

Things to Do Memorial Day Weekend

Big weekend ahead. Got plans? Here are some suggestions, assuming that you're not heading off to hibernate at your cabin...