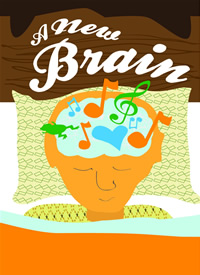 Packed with show-stopping numbers by two-time Tony Award winner William Finn, this funny, touching and powerful musical follows Gordon Schwinn, a composer for a small-time children’s show with dreams of being a big-time composer on Broadway. Currently standing in his way is a lack of ambition, a serious case of writer’s block, and some fluid in his brain that’s trying to kill him. As family and friends flock to his bedside, Gordon racks his ailing brain for a song that might live on after he’s gone.