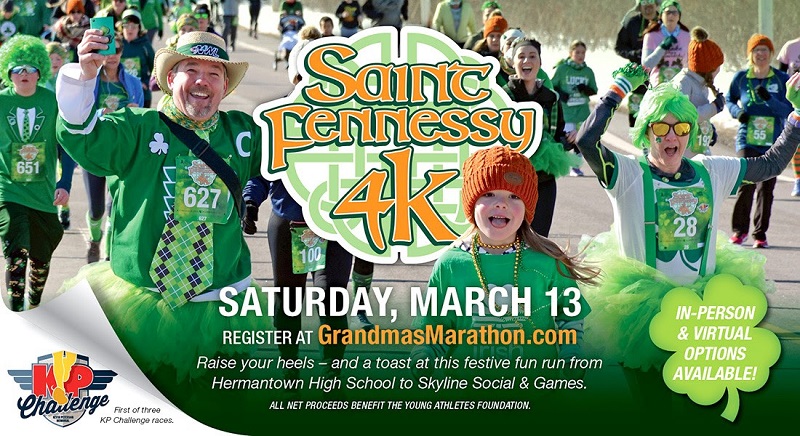 The seventh official running of the Saint Fennessy 4K in Hermantown – organized by Grandma’s Marathon – is an untimed fun run and serves as a fundraiser for the Young Athletes Foundation.

(The event is being promoted as the eighth annual because some runners ran the course unofficially during the pandemic, but the 2020 event was officially canceled, making the 2021 event the “seventh official running.”)

The race begins at Hermantown High School and travels along Arrowhead Road. The course turns north on Stebner Road and the finish line is positioned just outside of Skyline Social & Games at 4894 Miller Trunk Highway.

There will be a costume contest conducted where prizes will be awarded to the participants with the most popular St. Patrick’s Day attire.

Shuttle bus service will be available free of charge from 9 a.m. to 1 p.m. between Skyline Social & Games and Hermantown High School after the event.

This is the first race in the 2021 KP Challenge where participants commit to run three Grandma’s Marathon races, including the Saint Fennessy 4K, Fitger’s 5K and Park Point 5-Miler/2-Mile Walk. The series is designed to keep participants on a regular running schedule that supports the successful completion of longer distances. KP Challenge participants will receive an exclusive jacket and finishers qualify for a guaranteed entry into the 2021 Garry Bjorklund Half Marathon upon completion of the final race.

Net proceeds benefit the Young Athletes Foundation, a Grandma’s Marathon program that focuses on the promotion and development of healthy and active lifestyles for youth throughout Carlton, Cook, Douglas, Lake and St. Louis Counties. Since its inception in 1990, the YAF has contributed more than $1 million to area nonprofit youth athletic organizations.

To register or for more information, visit grandmasmarathon.com.