Teague Alexy will debut a new backing band, Common Thread, during shows this weekend in Duluth and Minneapolis.

“Duluth guys off and on and in different combinations for a few years,” says Teague. “They are getting so good, we had to give them a name.”

Alexy is probably best known for his Americana songwriting in the nationally-touring brothers duo Hobo Nephews of Uncle Frank. Or, maybe you remember 2004 when Teague Alexy with Medication was filling dance floors around Minnesota, or you’ve heard that Teague is an award-winning author, or that he grew up in a South Jersey rap band. 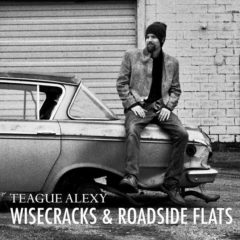 Wisecracks & Roadside Flats is a news podcast featuring American stories and folktales from musician, author and storyteller Teague Alexy. The debut episode, “Million Dollar Magic Take,” is Teague’s experience with the classic Bob Dylan and the Band album The Basement Tapes. Teague first hears the album on a solo road trip and years later finds himself as part of a tribute show to the album in Bob Dylan’s hometown of Duluth.

Subscribe to the Wisecracks & Roadside Flats podcast for free on iTunes and Stitcher.